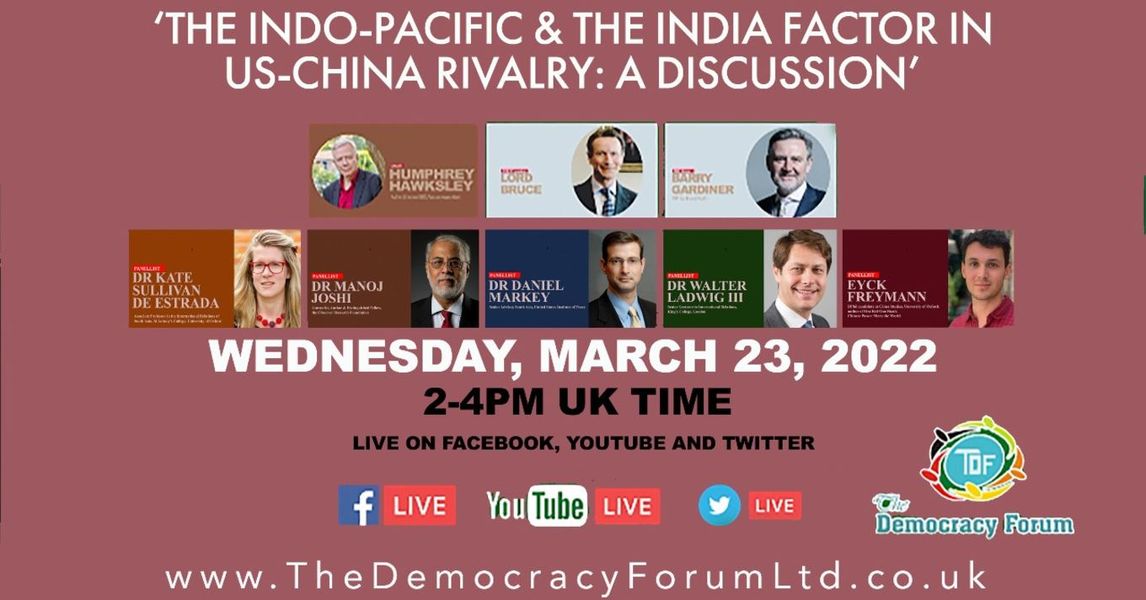 The strategically significant Indo-Pacific region, and the ‘India factor’ in US-China rivalry, were the points of focus for The Democracy Forum’s latest virtual debate

As the global community responds to the Russian invasion of Ukraine, The Democracy Forum hosted a virtual seminar that shone a light on security in the Indo-Pacific region and the roles played there by three major world powers: America, India and China.

Addressing India’s long policy of non-alignment, TDF President Lord Bruce also highlighted Jawarharlal Nehru’s 1949 warning, in response to the emergence of the Cold War, that ‘the very process of marshalling the world into hostile camps precipitates the conflict it had sought to avoid’. It is arguable that the invasion of Ukraine has pushed India into just this predicament, said Lord Bruce. Forced to confront the consequences of its multipolar alignment with both Russia and the US, India chose to abstain on three occasions at the UN Assembly in the last month, rather than joining the condemnation of Russia’s actions – though abstention does not equate to support. Despite its careful strategic balancing of collective security interests in the Indo-Pacific, clearly represented by its membership of the Quad, India has been reluctant to discontinue its reliance on Russia’s traditional role as its principal arms supplier, which could lead to the imposition of sanctions by the US. And a more insidious threat to India’s security may emerge, added Lord Bruce, if the US recalibrates its global military responsibilities and its commitment to the security of Europe, to the detriment of its strategic alliances in the Indo-Pacific region. This could create what former Indian foreign secretary Shyam Saran called ‘a nightmare scenario where the United States comes to the conclusion that it confronts a greater threat from Russia and that this justifies a strategic accommodation with China – in blunt terms, to concede Chinese dominance in Asia while safeguarding its European flank’.

Strategists have long argued that the Indo-Pacific is where the great power rivalries of the 21st century will play out, said Dr Walter Ladwig III of King’s College, London, due to the region’s oil, gas and other valuable reserves, and its waterways, which are a vital conduit for bringing those resources to market. So there are fears that important segments of the region form part of the ‘arc of instability’, where there are large numbers of failed and failing states, unresolved maritime disputes, environmental degradation, etc.

Ladwig highlighted the very different foci the various states have in this realm, with the US prioritising the Pacific (since the Indian Ocean has less direct value for the US), and India taking in the whole region and prioritising the Indian Ocean. For China, both the Pacific and Indian Oceans are important, with flashpoints such as Taiwan and problems in the Korean peninsula, and Chinese economic growth depending on sea lanes of the Indian Ocean. One should recognise that the notion of a permanent Chinese naval presence in the Indian Ocean, and its ostensibly commercial infrastructure projects as part of its maritime silk road, is alarming for India, said Ladwig. And since China is the principal military patron of India’s troublesome neighbour Pakistan, Sino-Pakistan economic ties are strengthening and China is moving into India’s natural sphere of influence in the Indo-Pacific, there are plenty of reasons for India to be looking askance at Beijing. When it comes to the Indo-Pacific, he concluded, India, the US and China are operating in a complicated geopolitical environment where the interests of the various parties only partially overlap and different pressures can simultaneously push pairs of states together, and pull them apart.

Dr Kate Sullivan de Estrada of St Antony’s College, Oxford, explored how US engagement with India stands to further polarise US-China rivalry, and also how India is both leveraging and working against this dynamic. She drew out the divergent understandings of the term Indo-Pacific, and the order that is envisaged in that geopolitical domain, positing two images of India in the region: first, as a US partner and a defender of a particular kind of order in the Indo-Pacific. This image frames India’s role in the region as part of a wider geopolitical response to a rising China. India is valuable in the Indo-Pacific as it can materially balance China, and institutionally balance China through the Quad – a hugely valuable role to both the US and its allies, and to India. The second image of India in the Indo-Pacific is of a country that engages selectively with a US-centred vision of order, and hopes to shape that order in ways that serve its own interests and preferred social roles.

Growing strategic convergence with the US has been valuable for India but it comes at a price, said Sullivan de Estrada, peppered as it is with expectations for India to play balancing and capacity building roles. Also, despite India’s very real security concerns vis-à-vis China, it doesn’t want to take on the US’ ‘enemy’ image of China, or pursue an overt strategy over Chinese containment. And while India’s refusal to take sides over Russia’s invasion of Ukraine has disappointed the US and its allies, it could promise a thaw in relations with China, sending a powerful message to Beijing that India does not unequivocally support a US vision of the global order.

For well over a decade the US has perceived India as central to how it manages the geopolitical challenges posed by China, said Dr Daniel Markey, Senior Advisor on South Asia at the United States Institute of Peace, who considered the risks to the US associated with increased India-China hostility. While India is a political and security partner for the US, part of a broader Asian counterweight to China, Markey also underscored India’s historic reticence to commit to a strategic partnership with the US, given Delhi’s doubts about US strategic intentions, for instance, with regard to Pakistan, and concern that the US was getting too close to China during the Obama era. So, India has pursued its own more independent approach, developing relationships with other major powers, including Russia and Iran.

Markey also spoke of the shift, from 2020, in how India perceives China, with a more lasting deterioration in New Delhi’s relationship with Beijing at a broader bilateral level. This suggests that 2020 presented new opportunities for the US and India to work more effectively in their partnership, with intensification of two-plus-two dialogues and the quad diplomatic breakthroughs. But the troubling aspect of all this, warned Markey, is that there are challenges for the US in a breakdown of India-China relations, as an escalation of border tensions, outstanding disputes over Tibet, etc, present a ‘no win’ situation for the United States, since failure to support India would be a strategic failure over the long term for the US, while failure to maintain peace would also be problematic, adding yet another point of friction between the US and China on an increasingly long list that includes Taiwan and the South China Sea. Greater India-China hostilities would also make India more reliant on Russian arms, as well as making it more distracted to its land border, and therefore a less capable strategic partner for the US.

For Eyck Freymann, a DPhil candidate in China Studies at Balliol College, Oxford, the focus was on the Quad, its purpose, what holds it together, and what is can and cannot become, based on its intrinsic design and membership. He outlined what the Quad is not: it is not a geopolitical coalition to contain China, or an alliance in the traditional sense, including a military one, which might act in defence of Taiwan. Nor is it an investment or trading pact, a grouping that exists to spread or impose democratic norms, or a group that exists to speak as one voice outside the Indo-Pacific region.

Quad is succeeding brilliantly, as evidenced by how concerned it has made China, which wants to fashion a vision for the Indo­Pacific that is neither free nor entirely open.

So, what is the Quad? Freymann referred to it as a set of rules – digital, environmental, rules for law of the sea, labour standards, etc – for what the Indo-Pacific should look like, set collectively rather than by a single country, and creating a playing field upon which the nations of the region will compete. Not that the obvious geopolitical context of the Quad’s common interests relating to China can be denied, he added. None of the Quad countries wants to be dependent on China for critical raw materials or components, for example, or for China to become a dominant naval power in the Indian Ocean, or to seize sovereign territory belonging to other states. For all its intrinsic limitations, the Quad is succeeding brilliantly, as evidenced by how concerned it has made China, which wants to fashion a vision for the Indo-Pacific that is neither free nor entirely open.

Looking at the subject from an Indian perspective was journalist and author Dr Manoj Joshi. Although the Chinese are seeking to exploit the perceived gap between India and the US, arising out of India’s stance on the Russian invasion of Ukraine, they have an uphill task, argued Joshi, as Delhi – while it may have adopted a loki diplomacy to deal with Beijing’s coercive behaviour along the disputed Sino-Indian border in2020, and soft-pedalled on Xinjiang, Hong Kong and Taiwan issues – is far from normalising its ties with Beijing. In fact, Delhi is not happy with the Russian action, but is merely acting to prevent a deeper Russia-China embrace. Also, India is dependent on Russian defence platforms up to 85% and has, furthermore, enjoyed close geopolitical ties with Russia since the 1950s. Close China-Russia ties are not good for India, so Delhi has gone out of its way to keep on the right side of Moscow. India has also rejected Western criticisms of its position, as many European nations have oil sufficiency, or are even importing it from Russia.

Regarding the US and India in the Indo-Pacific, Joshi cited the latest Indo-Pacific document, in which Washington has pledged to support India’s role as a net security provider, as it needs India’s potential to balance China in the region.

Seminar Report: Brothers, not ‘others’