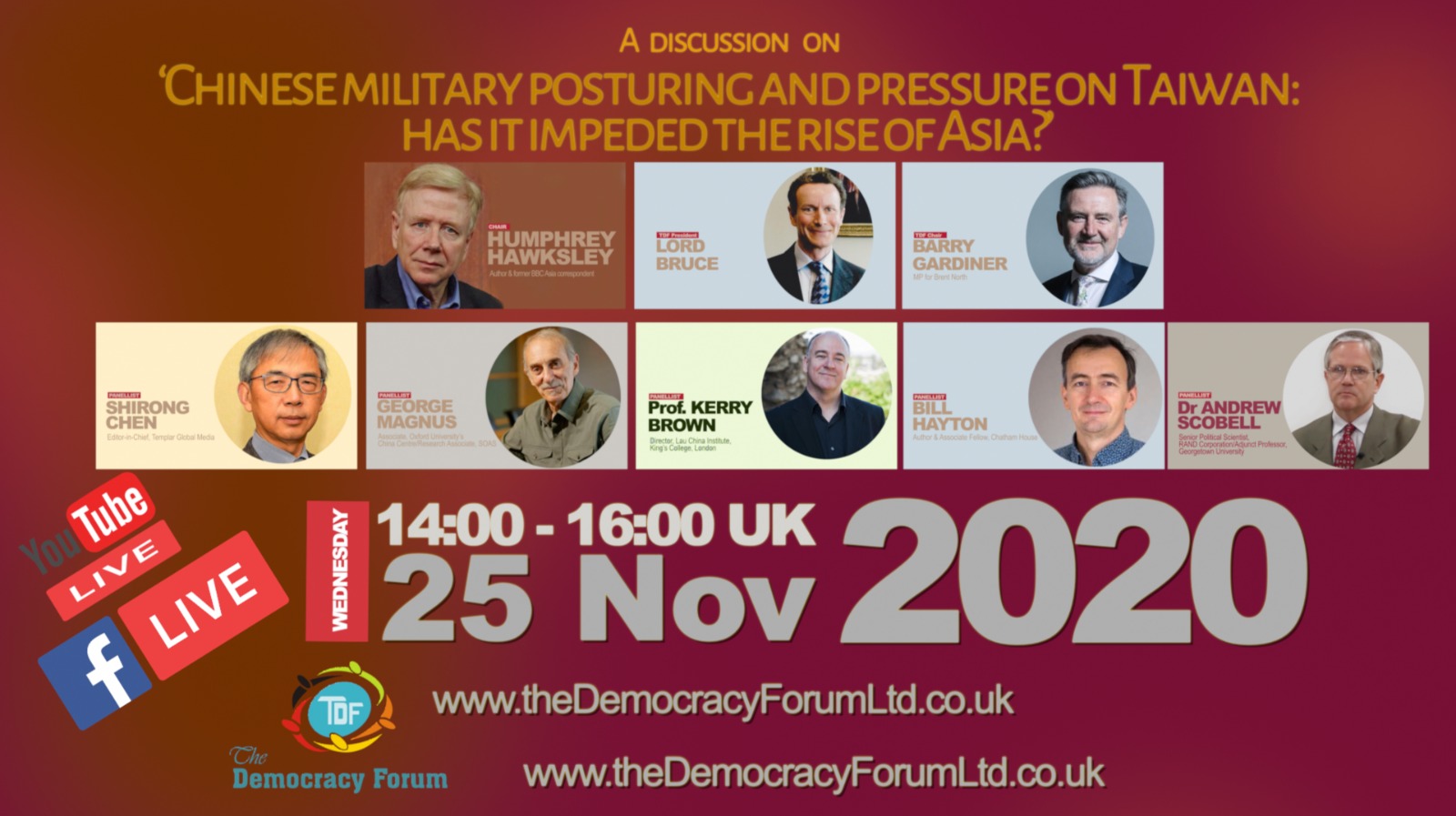 Has Chinese military posturing and pressure on Taiwan impeded the economic and socio-political rise of Asia, or has it helped in any way? This complex central question was the focus of The Democracy Forum’s latest virtual seminar, which shed light on the volatile situation in the Indo-Pacific region.

The discussion aimed to examine ‘the strategic tension and increasing military preparedness in Southeast Asia and the South China Sea’, said TDF President Lord Bruce in his introductory comments, and was part of the Forum’s goal to offer critical insights into China’s foreign policy and its impact on neighbouring countries. Beijing’s claim of sovereignty over Taiwan ‘appears to be entering a precipitous phase’ which, if allowed to escalate, could have grave consequences for regional security and the global economy. China’s relationship with Taiwan is undoubtedly influenced by its intense rivalry for regional hegemony with the US and its allies, and fear of a Chinese invasion has led Taipei to increase its defence budget by 10 per cent this year – its highest for 20 years.

America’s incoming president should therefore have no illusions about President Xi, as his ultimate goal, many commentators believe, is to end Taiwan’s de facto autonomy and bring Taiwan under Chinese control, and waiting for a Chinese invasion would be ‘a recipe for disaster’. A China in possession of Taiwan, concluded Lord Bruce, ‘would dominate East Asia and the Western Pacific as never before, scrambling the entire global strategic equation’.

Thanking The Democracy Forum for hosting the event, H.E. Mr Kelly Hsieh, Head of Taiwan’s Representative Office in the UK, highlighted the security reality Taiwan is currently facing, with its great strategic values for the region in terms of security, economy and democracy – values that are ‘key to the peace, stability and prosperity in Asia and beyond’. China’s ‘sabre-rattling’ vis-à-vis Taiwan is multi-dimensional, said Mr Hsieh, with Beijing’s military build-up a ‘big hammer’ that is causing a growing sense of unease among countries in the region. China’s aggression in attempting to change the game rules has recently intruded into Taiwan’s air defence identification zone on an almost daily basis, and the intensity and frequency of the threat is increasing as it attempts to destroy the status quo. PLA aircraft and other official vessels have also openly intruded into the ADIZs of neighbouring countries, sending a dangerous and provocative signal to the region and the international community.

For its part, Taiwan will do everything possible to maintain peace and stability across the Taiwan Strait, said Mr Hsieh, though it will also continue to ensure its credible defence capability. He urged the international community to pay close attention to the growing aggressiveness of the Chinese Communist regime, and work together for peace and stability in the Indo-Pacific. Concluding on an optimistic note, Mr Hsieh saw recent calls for like-minded democratic nations, both in the region and beyond, to work together as a good sign.

Shirong Chen, Editor of Templar Global Media, reflected on how the current situation had developed, from the nomenclature – the Republic of China, today more commonly known as Taiwan, and the People’s Republic of China – to the question of which is the ‘real’ China. He looked back on the long hostilities between mainland China and Taiwan, but also at the thawing of the relationship during the 1980s, and the two sides’ shared language, culture and traditions that have allowed them to co-exist ‘more or less peacefully’. However, Taiwan has now moved forward in terms of autonomy and democracy, while the PRC, despite its economic reforms and opening up, has a lot of work to do in terms of democratic processes.

So, where is the current tension coming from? asked Chen. He considered the recent US arms sales to Taiwan – some of which might be called more offensive than defensive – and said that, as the US-china relationship became more strained, Taiwan tended to be used as a political lever. Chen advised a long view of what is best for Taiwan, China and the Indo-Pacific region and hoped that, under the new Biden administration, things would ‘become quieter’ as he did not see mainline China having the appetite for a full-scale invasion of Taiwan. However, if Beijing feels the RoC is moving further away from the ‘motherland’, or that the issue of Taiwan is impeding China’s development, or if there is perceived intervention by an ‘outside force’, a forceful means of reunification cannot be ruled out and we ‘can’t take peace for granted’.

In examining the webinar’s main premise, Dr Andrew Scobell, a senior political scientist at  the RAND Corporation, considered psychological dimensions such as the PRC’s perception of Taiwan as a renegade province. Although Beijing ‘insists it seeks peaceful reunification’, it has ‘refused to renounce the use of force where Taiwan is concerned’ and employs a ‘carrot and stick’ approach, with the ‘sticks’ of sabre-rattling in the Taiwan Strait and push for reunification offset by ‘carrots’ of unprecedented economic and people-to-people cross-Strait interactions which have benefited Taiwan, and a high degree of autonomy. Beijing’s agitation over this small island, said Dr Scobell, is because the CCP perceives Taiwan as an existential threat, a ‘rival China’ whose dynamic economy, technological sophistication and vibrant democracy offers an attractive alternative model of governance to the repressive Communist dictatorship on the mainland. The CCP also considers that Washington is using Taipei in a game of geopolitical chess to contain China and sabotage its rise.

While such rising tensions would probably exist even if all three actors perceived each other accurately, said Dr Scobell, misperceptions heighten their intensity and increase the potential for crisis and conflict in the Taiwan Strait. Each sees the other two as very different from them in terms of cultural values and strategic priorities and goals, and each misperceives the intent and motives of the others. From the context of its own ‘calculus of rationality’, Beijing assumes that Washington or Taipei are either behaving irrationally, or that their intentions towards China are duplicitous or malevolent. While perceptions matter, concluded Dr Scobell, misperceptions make matters worse. This does not excuse China’s bad behaviour, but might help to explain it – though this is cold comfort for Taiwan and the rest of Asia.

For George Magnus, an economist and Associate at Oxford University’s China Centre, conventional wisdoms about China and Asia are often based on very simplistic economic notions; but if one looks at a deeper level, emerging Asia is still a long way off its richer peers, though a benign and open global economy has been Asia’s friend for the past 20-odd years, with countries including Japan, India and Vietnam, as well as China, having made great economic growth. Nonetheless, China is the only country that has materially lifted its share of world GDP in the last 40 years. With the rest of the world reeling from the second systemic shock in about a decade, China is taking much comfort from its own economic heft and bounce-back from the pandemic.  While flexing its economic muscles in terms of foreign policy pre-dates Xi Jinping by a few years, said Magnus, there is no doubt that under Xi, foreign policy and international relations in China have ‘turned much more towards truculence, assertiveness’ and widespread interference and threats, which often borders on illegality and is commonly known as ‘coercive diplomacy’. Taiwan is clearly in the cross-hairs in this regard, and Magnus found it hard to see a time in the next ten years when it would not be in that position.

Both the US and China have much at stake by possibly losing Taiwan: for the US, it would herald ‘a precipitous decline’ of its presence in the region and shockwaves throughout the Quad; for China, the options of continued coercion and the possibility of a military outcome. Of course, Taiwan is just one of many international relations problems for Asian countries, stressed Magnus. These include security issues such as China’s claims to islands in the East and South China Seas and hostilities with India, and economic integration – Magnus highlighted the recent signing of the RCEP and its geopolitical value for China and emerging Asia overall. Viewing US-China relations as largely an American issue is to miss the point, insisted Magnus, since China itself bears much responsibility for the deterioration in the current geopolitical climate which goes far beyond the US, and there is widespread reluctance across the world to buy into China’s narrative of its peaceful rise and the BRI’s ‘common destiny of the shared future of mankind’.

Former BBC Asia correspondent Humphrey Hawksley deftly moderated the panel, highlighting issues such as conflicting east-west values, and TDF Chair Barry Gardiner offering a closing address, in which he underscored the need to understand China in the context of its history, and hoped the Beijing-Taipei relationship would, in time, meet the aspirations of both sides.

Seminar Report: Arab-Israeli strategic realignment and the growing isolation of Pakistan in the OIC