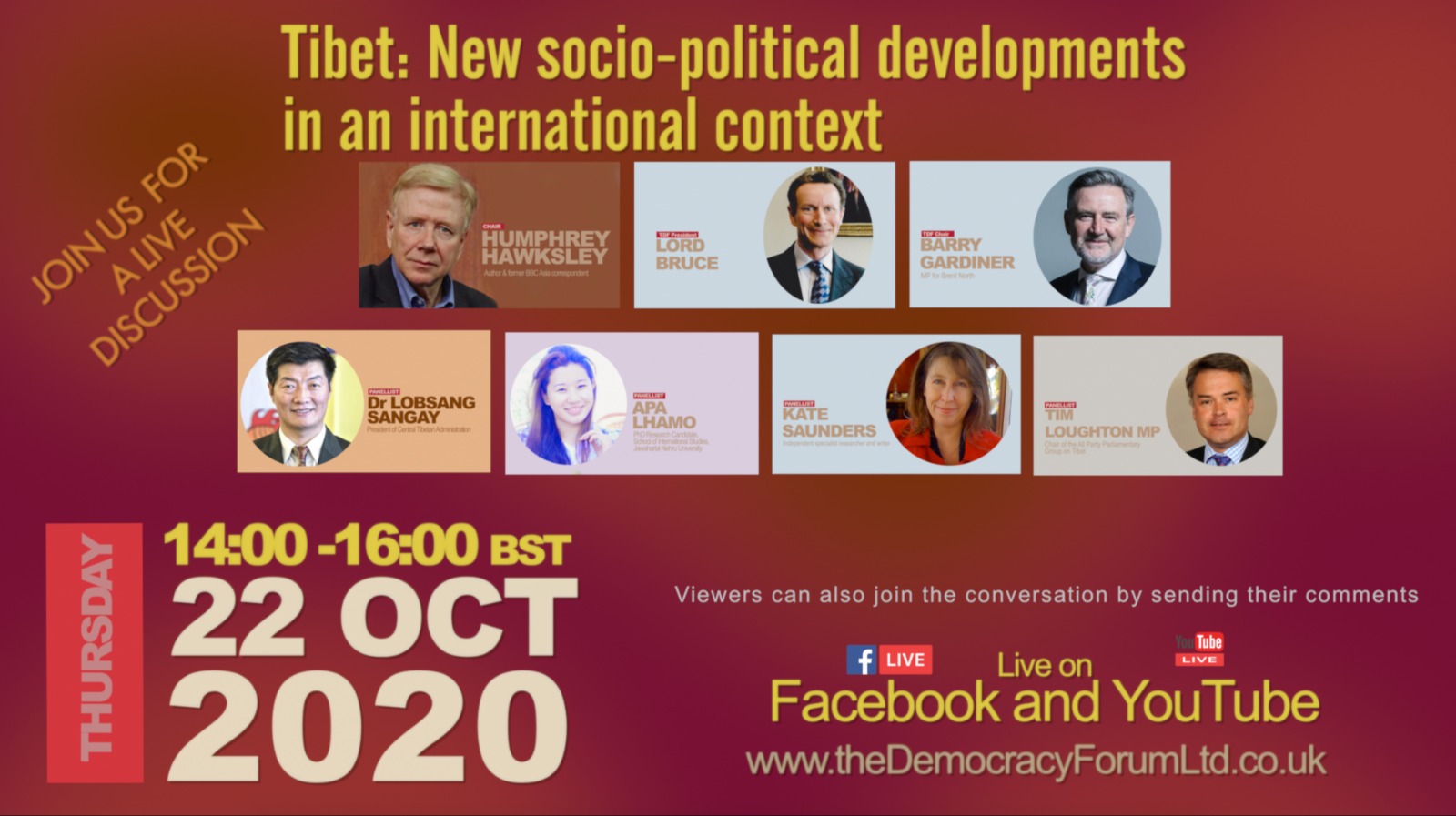 In the wake of recent bills in both the US and UK, aimed at promoting autonomy for the Tibetan people, The Democracy Forum and its President Lord Bruce welcomed a panel of distinguished speakers to discuss the issue at its latest online event, entitled ‘Tibet: new socio-political developments in an international context’.

In his opening address, Lord Bruce highlighted the Forum’s increased scrutiny of China in recent months, adding that it is now clear Tibet ‘has become a model for the apparatus of Chinese state repression’, with the region’s experience providing a chilling lesson in this form of coercive and systemic intimidation.

This year, however, the international community is becoming much more confident in naming and shaming China’s treatment of Tibet, said Lord Bruce, with an international panel of special rapporteurs recently urging the UNHRC to take decisive action to evaluate all violations of human rights in Tibet, and closely monitor the situation. All UN member states and agencies are also being urged to cooperate in order to leverage political and economic pressure on China where it is most effective, while the US Congress has passed bills to prevent Chinese interference in the succession of Tibetan Buddhist leaders, and to recognise the Tibet Autonomous Region as an independent country. British parliamentarians across the political spectrum also censured the Chinese Communist Party for deliberately attempting to eliminate Tibetans’ cultural identity and erase forever their ethnicity, and a research paper commissioned by the Inter-Parliamentary Alliance on China has exposed the existence of China’s ‘Orwellian policy, which is forcing the resettlement of farmers and rural labourers, imposing ‘re-education’ to ‘eradicate backward thinking’, and has sent over half a million Tibetans to labour transfer camps under strict military supervision. Perhaps the most insidious and mendacious attack on the integrity of the Tibetan people, said Lord Bruce, has been the Chinese subversion of their Buddhist faith, including the deception surrounding the disappearance of the 11th Panchen Lama in 1995, and a plan to supplant the legitimate successor to the Dalai Lama.

Amongst the various global flashpoints of Chinese expansion and repression, Tibet has fallen off the list, said the event’s moderator, former BBC Asia Correspondent Humphrey Hawksley, so he was glad it was now receiving much more attention. Hawksley underscored China’s argument that it was bringing modernisation, infrastructure-building and better healthcare to the region, which must be set against the case for conserving the religion and culture of minority groups, and notions of repression.

In his presentation, Dr Lobsang Sangay, President of the Central Tibetan Administration, gave an overview of the current situation in Tibet, addressing various concerns, including repressive Chinese measures within Tibet, continued Chinese encroachment into India, and all-important water issues.

With the webinar taking place amid a global pandemic, Dr Sangay reminded the audience that this had originated in Wuhan and spread worldwide as a result of Beijing’s lack of transparency and democratic processes – in contrast to the Tibetan government-in-exile’s practice of robust democracy, which could be replicated by refugees from other conflict areas.

On the matter of the India-China border conflict and the Chinese army’s incursions into India, he argued that, while a once independent Tibet had acted as a buffer zone between China and India, since the Chinese occupation this is no longer the case. India-China tensions cannot therefore be addressed unless the issue of Tibet is addressed.

Water is another key issue, said Dr Sangay, as Tibet is a major source of water for 1.4 billion people in Asia. But China has conveniently failed to sign the UN Convention on Water Sharing and is therefore not obligated to share water with people downstream. China’s control over the flow of water by constructing major dams is already affecting millions of people throughout Asia, and widespread water shortages could be another flashpoint. Dr Sangay also highlighted the repressive situation inside Tibet, with half a million Tibetans in concentration camp-like situations, and quotas set to bring Tibetan youths into urban settings where, under jail-like conditions, they are given ‘livelihood skills’ in the name of poverty alleviation. Despite various sources praising China for these projects,  Dr Sangay insisted that such measures uprooted people from their culture and homes with the essential aim of Sinicising them.

Ending on a cautionary note, Dr Sangay said China’s tentacles are everywhere, with several UN agencies headed by Chinese officials and others with Chinese personnel in key positions. China is trying to restructure the UN and redefine human rights, using poverty alleviation as a justification. This affects all countries and ‘unless we transform China, China will transform us,’ he warned.

To understand what is happening in Tibet, Apa Lhamo, a PhD Research Candidate at Jawaharlal Nehru University’s School of International Studies, said one must look at the key policies being implemented by the CCP in Tibet: securitisation through intimidation and enticement; propaganda campaigns aimed at Sinicising Tibetan Buddhism; and the increasing governance of Tibet’s borders. She spoke of the massive control measures and surveillance systems used to monitor Tibetans, as well as the  enticements of development, awards and rewards, aimed at creating a compliant and cooperative society.

Following his appointment as Party Secretary in TAR in 2011, the hardline Chen Quanguo rolled out a huge social stability strategy entailing massive police recruitment. Llamo quoted a running joke at the time that claimed Lhasa was now safer as all the criminals had been appointed as either police officers, informers or government agents.

Other layers of the surveillance system on Tibetans include encouraging people to ‘watch’ their own families, friends and neighbours, and the development of a CCP-style social management system, or police force, which keeps checks on ‘special risk groups’ – for example, former political prisoners, those who advocate Tibetan independence, or people who carry photos of the Dalai Lama. Any form of protest will draw these security forces to the scene within minutes. Lhamo also underscored propaganda and other measures used to Sinicise Tibetans, such as Han-Tibetan intermarriage and greater controls on religious institutions, and addressed the CCP’s strategy in building border defence villages to consolidate Tibet’s border. She ended by stressing the need to see the Tibet issue as one of colonial occupation, and to have a geostrategic, ecological perspective on the region.

Thanking TDF for giving the Tibet cause a platform, Tim Loughton MP, Chair of the APPG on Tibet, flagged up a recent debate in the House of Commons’ second chamber, which discussed China’s rapid expansion of its labour programme in Tibet. This generated much cross-party interest and support, and he was heartened to see so many people now prepared to call out China for the abuses it is committing in Tibet. He strongly condemned the redevelopment programme that China is carrying out in the name of alleviating poverty, when it is actually ‘the Sinicisation and standardisation of the parts of Tibet that don’t fit in with the Chinese model’.

Loughton also touched on Chinese influence in UK and other countries’ boardrooms – with personnel paid to stand up for, but not to, China, as well as in university campuses, via ‘insidious Confucius Institutes’ through which China attempts to buy influence amongst students and academics. And he highlighted its use of technology to intimidate the Tibetan diaspora.

So what is the global community doing about all this? asked Loughton. One thing is the Tibet Reciprocal Access Bill that passed through the US Congress with unanimous cross-party support, and the UK version produced by Loughton himself, which has taken legislation from the US and rewritten it into British parliamentary terms. Though a private members’ bill that is not yet government legislation, it too has received cross-party support and could be adopted by the UK government. Such measures by a range of countries would show China that it is being called out on its actions as it is only by working together that we can stand up to China.

Using illustrative slides, Kate Saunders, a writer and independent specialist researcher, examined the latest trends and developments in Tibet, which she insisted is not a marginal issue for Beijing, but is of increasing geo-political importance. The CCP has lately developed ‘new and creative methods’ to tell Tibet’s story to the world in the 21st century, she said, and it has now reached new levels as it aims to ‘break connections, tear up cultural roots and instil the red gene’ in the region. Vis-à-vis policies of ‘re-education’ Saunders said that, just as the Party is trying to change Tibetan minds, they are also trying to change ours, using the Covid-19crisis to wage political warfare to secure strategic advantage and global pre-eminence, and portraying China, not as the country that allowed the virus to spread unchecked for weeks, but the country that defeated Covid and can save the world.

Xi Jinping has reinvigorated ideology in China to an extent not seen since the Cultural Revolution, said Saunders, and there has been a real shift in both the institutional and the policy direction emanating from Beijing on Tibet. What is happening in both Xinjiang and Tibet is the leading edge of the much more coercive ethnic policy under Xi’s new era of Chinese power, one that seeks to accelerate the political and the cultural transformation of non-Han minorities. Every policy now aims towards the evisceration of what is distinctive and unique about Tibetan and Uighur identities. The ‘feedback loop of assimilation’ practised in both Xinjiang and Tibet threatens the survival of cultural and religious civilisations, and demonstrates the ‘clear and present danger’ that China’s networked authoritarianism presents beyond its borders.

Nevertheless, Saunders retained some optimism for the future of Tibetans, as resistance can take many forms – for example, the act of refusing to recognise what is not worth recognising.

Seminar Report: The weight of water