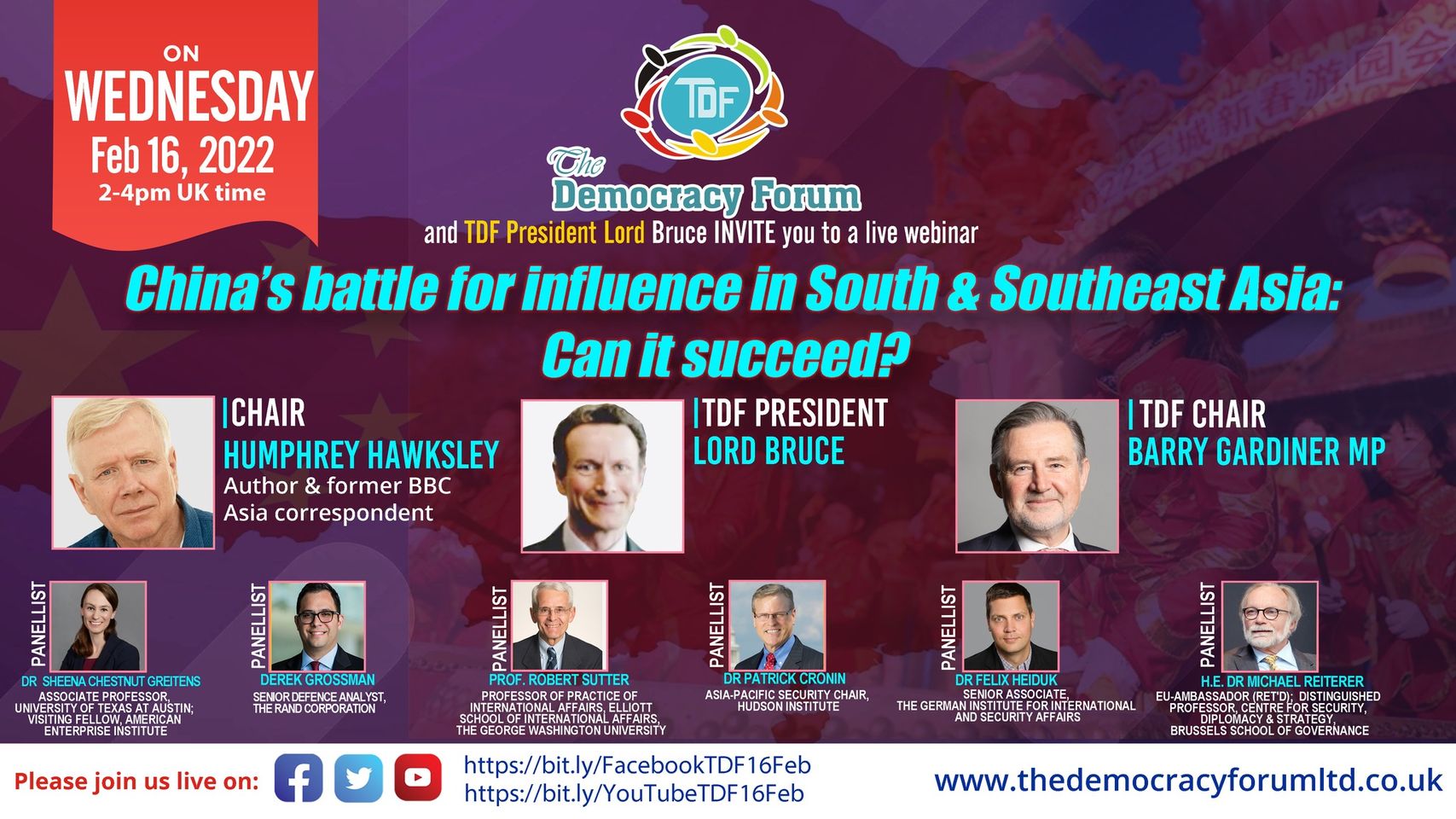 In its latest panel discussion, The Democracy Forum shone a spotlight on the inroads China is making in South and Southeast Asia

As China’s economic and political footprints continue to extend across the globe, South and Southeast Asia are areas of key strategic interest. To discuss how regional governments have responded to Chinese engagements, and other key issues, The Democracy Forum hosted a February virtual seminar, titled ‘China’s battle for influence in South & Southeast Asia: Can it succeed?’

The event marked 50 years to the month since US President Richard Nixon’s visit to China in a step towards winning the Cold War and ushering China into the international rules-based order. But Henry Kissinger’s prediction that, when China no longer needed the US it would be very difficult to deal with, has proved prescient. The authoritarian bond between Beijing and Moscow appears to be strengthening daily, with the goal of weakening America and its allies, and the tentacles of influence extend everywhere. Beijing views Asia as its own backyard, with the countries of South and Southeast Asia – most not developed democracies – rich pickings for China.

Offering an overview of China’s economic engagement with the region as a key point of influence was Sheena Chestnut Greitens, Associate Professor at the University of Texas at Austin and a Visiting Fellow at the American Enterprise Institute. While China’s economic dominance is a geo-economic reality in the region, Greitens said this was not always accompanied by high political trust, which has weakened over tensions in the South China sea and China’s handling of the global pandemic. But public opinion across the region is uneven, with some nations more pro-US and others more pro-China – though there is reluctance to be pushed into a position of being forced to choose between the two. Greitens also discussed a largely overlooked area of Chinese activity and influence: its growing use of law enforcement diplomacy to build partnerships and sway in the region. A new approach, including use of international organisations, is effective in a region inclined towards multilateralism, and China is also providing police training as it speaks of ‘sharing the experience of a safe China’. Law-enforcement and police diplomacy often takes place side by side with the export of surveillance technology to a number of Southeast Asian countries, and geography is no barrier to Chinese law enforcement. We are not necessarily seeing China impose a single model of Chinese-style Marxist-Leninist authoritarianism, concluded Greitens, but we do see a willingness to supply some of the tools that could then be used to make more capable authoritarian states in the recipient countries.

China poses the main challenge to harmony in the Indo­Pacific

For Dr Patrick Cronin, Asia-Pacific Security Chair at the Hudson Institute, the focus was on the US’ regional strategy and China’s battle for influence. The Indo-Pacific feels the brunt of Chinese coercion but also competition, and the US and a few western countries are standing in the way of Xi Jinping’s global vision, which includes a vast global platform. It is clear, then, that China poses the main challenge to harmony in the Indo-Pacific, said Cronin, as it tries to become the world’s most influential  power. This is a global struggle, more intense around the periphery of China in South and Southeast Asia. Cronin saw the Biden administration’s evolving Indo-Pacific strategy as having a lot of continuity with Trump and Obama’s, in that it tries to push peace, prosperity and pluralism. The strategy of pushing back does not only focus on negatives regarding China but on creating a more positive agenda, such as the Quad, which tries to highlight what those democracies stand for, rather than against. Nonetheless, China is a persistent challenge and, besides economic aspects, there are ideological, political, technological and military elements to the competition. For instance, China is embracing the junta in Myanmar, thereby dismissing democratic inroads made there, even as it hedges its bets with the National Unity Government. Meanwhile, the US administration is downplaying terms such as democracy and human rights, which do not sit well with large swathes of Asia, and focusing on a more pragmatic approach towards working with Southeast Asian nations on their terms. Cronin also spoke of the Biden administration’s embrace of India as a beacon of South Asia, and he could not see China making inroads with big democracies like India or Indonesia. 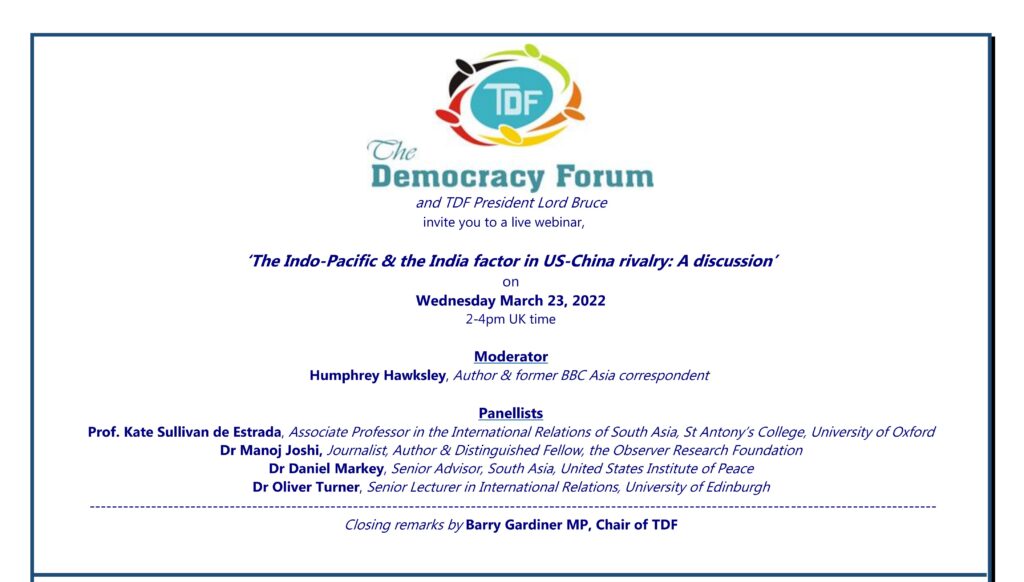 Derek Grossman, a Senior Defence Analyst at the RAND Corporation, considered how the US is faring in Southeast Asia, a region critical to winning the strategic competition against China in the Indo-Pacific. On a positive front, Grossman highlighted points such as Biden’s visible goal of placing allies and partners at the centre of his foreign policy in Southeast Asia, his focus on upholding international law in the South China Sea, and the dialling back of some of America’s tougher language on competition with China, which was welcomed throughout Southeast Asia. Also welcome is the Biden team’s clarification that no Southeast Asian country is required to align with the United States – rather, Washington argues that the region should prioritise maintaining a rules-based order and ‘free and open’ Indo-Pacific. That plays well in Southeast Asia, where countries do not want to see further militarisation of the region or be pressured into alignment with either Washington or Beijing. Another positive trend, said Grossman, is that US-Southeast Asian relations under Biden have a broader agenda than just the divisive China issue, including climate change, Myanmar, and pandemic recovery. However, he also underscored the negatives, including Biden’s decision not to call a single Southeast Asian leader for a bilateral talk during his first year in office, whereas he had hosted India’s Mr Modi and other leaders at the White House. Grossman also pointed to the lack of US ambassadors to the region, and the administration’s lack of a real regional economic or trade policy as an alternative to the Trans-Pacific Partnership, to counter Beijing’s Belt and Road Initiative and overall economic pull on Asian countries.

Critiquing the US-China perspective as too much of a binary lens through which to view this issue was Dr Felix Heiduk, Senior Associate at the German Institute for International and Security Affairs. Taking a more bottom-up view, the West still signals that it is more aligned with Southeast Asia than China, but Heiduk felt that democracy, freedom, etc were not sufficient alone to open doors in the region, especially in the post-Covid era, as these countries are more focused on material needs and economic recovery than freedom, openness or balancing China. Many Southeast Asian countries don’t want to put all their eggs in one basket, sending mixed signals to Washington, Beijing and other powers. The second reason for Heiduk’s critique of the binary view was that Southeast Asia is no longer in a hegemonic era, as the liberal international order under the US has crumbled. Also, America is not part of RCEP, etc, leaving the door wide open for China and other actors such as Japan. However, Heiduk didn’t see China taking the US’ place, as it doesn’t have the soft or hard power. The inter-regnum between Pax Americana and Pax Sinica will be with us for some time, as the battle for Southeast Asia enters a new phase of multiplexity

Dr Michael Reiterer, EU-Ambassador (ret’d) and Distinguished Professor at the Brussels School of Governance, shared Heiduk’s non-binary view, arguing that it is crucial for the EU to strengthen cooperation with countries in Southeast Asia, the Indo-Pacific and beyond, to make them more resilient and help them avoid making choices they do not want to make in the great power competition.  Strengthening partnerships can be done through sectoral cooperation in areas of mutual interest, such as keeping regional trade open, ocean governance and cyber security, while multilateral cooperation includes working with ASEAN and ASEAN centrality, ASEM (Asia Europe Meeting) and support for the Mekong River Commission. In pursuing effective multilateralism, Reiterer said, China remains part of the political process, thus avoiding the ‘encirclement syndrome’.

Looking at China’s successes in the region, final panellist Robert Sutter, Professor of Practice of International Affairs at the George Washington University, touched briefly on the scenario in South Asia, saying that, despite Beijing’s advances in Sri Lanka and Pakistan, he was not too concerned about a big Chinese expansion in South Asia because of India. But he saw China’s success in making gains in Southeast Asia as representing the area of most significant advance in Chinese influence countering the US in the Asia-Pacific in the past decade. Over the past year, China has been preparing policies to make it strong in Southeast Asia, and President Xi is actively involved in this area – unlike the US, whose weakened policies are being undermined by China. What is the substance behind this? China-ASEAN trade is booming, as is Chinese infrastructure and investment, and China’s control of headwaters of rivers important to Southeast Asian development provides a unique leverage on downriver countries. Also, China has sustained good relations with the Myanmar junta, putting it in a much better position than the US to deal with the crisis, and its military, coast guard and maritime militia ably controlled and defended China’s enormous claim to most of the South China Sea against weak Southeast Asian claimants.

Closing the event, TDF Chair Barry Gardiner MP said that, while a collaborative international order is vital, we must consider the values that we can collaborate on because, though the West might rightly focus on trade in its dealings with Southeast Asia, the trouble is that trade is not always used a sit could be, to enhance social and human rights issues, or environmental standards.

Seminar Report: Country at the crossroads