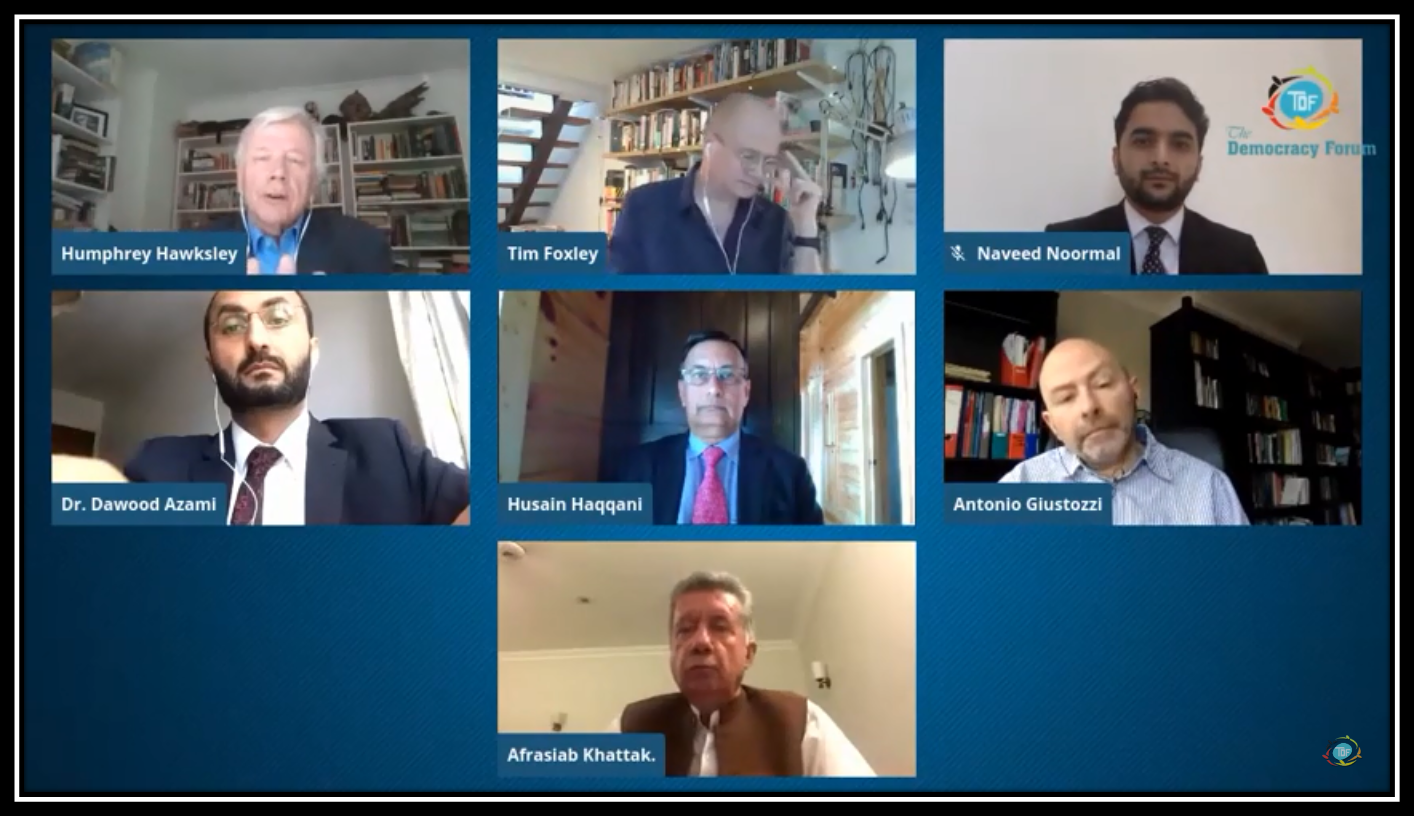 ‘Who will govern Afghanistan?’ was the question asked of a panel of experts at The Democracy Forum’s July 20 webinar, as they reviewed the impending US withdrawal from the war-torn country and the resultant crisis that may unfold.

After much in-depth analysis, the conclusions were far from optimistic.

In his opening address, TDF President Lord Bruce warned against thinking the impending US withdrawal would be a straightforward process. Rather, Afghanistan remains ‘a bloody battleground of rivalry’ between different global, regional and domestic players, and the Taliban has been called on to commit to very little in the so-called peace agreement, which, Lord Bruce said, could simply be the US agreeing the terms of its withdrawal. He voiced concerns over a future vacuum post-US draw down, which could allow militant groups to operate at large, and over the Taliban’s drafting of a charter for forming an Islamic emirate, which would reverse rights granted by the current Afghan constitution. Afghanistan’s political geography opens up its nascent state to interference from several regional players and their proxies, including Iran, Pakistan and China, with Beijing having ‘hedged itself against most eventualities’ likely to emerge from US withdrawal, and hence well placed to weather any ensuing chaos. He hoped the webinar would stimulate further debate about the future of Afghanistan and the unique set of challenges facing the Afghan people.

The changing regional landscape around Afghanistan was the focus for Dr Dawood Azami, a Multi-Media Editor in the BBC World Service. He pondered what the future might hold for the country, given the past and present involvement of nations including Russia, Iran, Pakistan and India – the only regional player without formal links to the Taliban, whose diplomatic outreach across the world had increased in recent times. Today’s new ‘great game’ in Afghanistan now involves more players, he said, and is ‘messier’, with little or no respect for the rules of the game. Key amongst these new players is China, which, after taking a backseat in the 1990s, is now enhancing its direct role in the region, including in trade and in the Afghan peace process. In response to a question from chair Humphrey Hawksley on whether China would want ever greater involvement in a still conflict-ridden Afghanistan, Dr Azami said this was likely, both economically and politically, especially in light of increasing Sino-Indian tensions and more competition between India and China for regional influence.

Despite the suspicion between regional rivals that remains an obstacle to stability in Afghanistan and the wider region, Dr Azami did not doubt that regional actors wanted peace. But they want it on their own terms. There could be no military solution, he concluded, only a solution through negotiation.

A stark warning came from Husain Haqqani, Director of South & Central Asia at the Hudson Institute and a former Ambassador of Pakistan to the United States, about the Taliban’s untrustworthiness as negotiating partners, due to their core ideology, their continued links with al-Qaeda and their track record. The group’s main interest is not in a peace deal, said Haqqani, but in negotiating terms for the Americans – who, under Trump, have lost interest in Afghanistan– to withdraw. He also highlighted the impossibility of ending an insurgency that is actively supported by a neighbouring state, Pakistan, which has consistently sheltered Taliban leaders since their removal from power and does not want the presence of its rival India there. 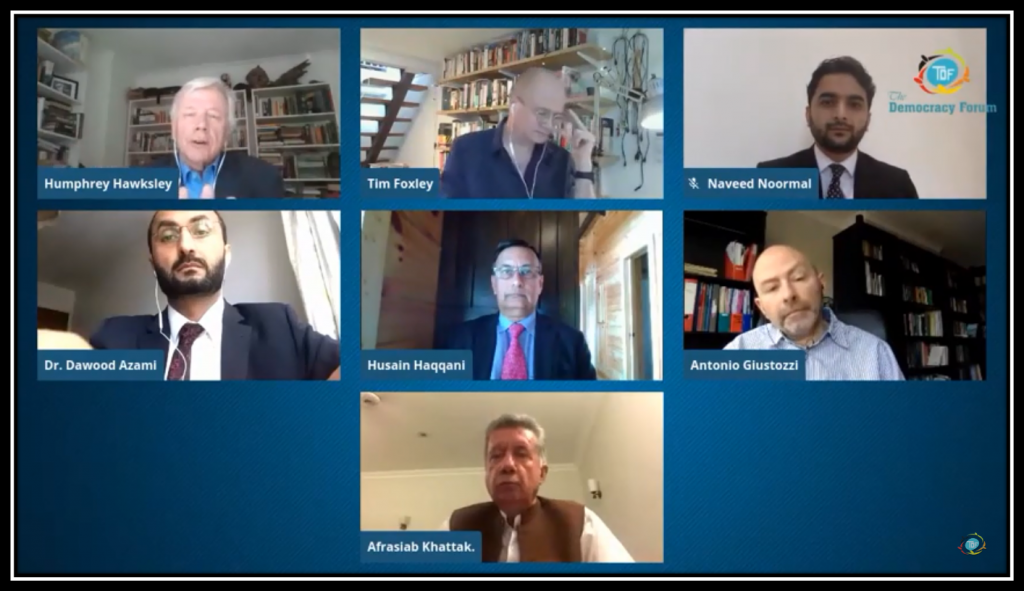 Regarding Beijing’s influence in the region, which has been growing through BRI and CPEC projects, Haqqani believed China would want to have a major role in Afghanistan, tapping its considerable mineral resources. Given the closeness between Pakistan and China and their regional policies, he foresaw the two countries moving in tandem on Afghanistan: Pakistan on security and China in the economic realm.

Haqqani was not optimistic about Afghanistan’s future. Even if the peace deal does work out, it will remain difficult to reconcile the Taliban’s ideals – which would take Afghanistan back to the 14th century – with more progressive ideas that could lead the country forward. Only a strong Afghan government, build on a consensus of non-Taliban factions, can save Afghanistan, he concluded.

In outlining the situation in Afghanistan from the perspective of the current administration. Naveed Noormal, First Secretary at the Embassy of Afghanistan in London, expressed some optimism, though it was mixed with concerns regarding the challenges that lie ahead, including the Taliban’s increasing attacks on civilians. Nevertheless, Noormal was hopeful about the support shown by Afghanistan’s international and regional partners for the intra-Afghan talks, as well as around the preservation of human rights in the country.

The role of regional players, particularly Pakistan and Iran, in the ongoing Afghan peace process was the main focus for Afrasiab Khattak, a former Pakistani senator and analyst of regional affairs. He saw the prospects for Afghanistan as bleak, given the ‘narrow and flawed framework’ of the Doha deal struck between the Taliban and the US, which is just about American withdrawal, not about peace and reconciliation in Afghanistan, and therefore gives an edge to the Taliban.

Khattak highlighted the less than good intentions of regional player Iran which, facing pressures from the US and the West, can gain leverage by destabilising Afghanistan. And he was critical of Pakistan’s ‘myopic’ policy vis-à-vis Afghanistan, shaped during the Cold War and called ‘strategic depth’ in Afghanistan – a way of hegemonizing the country as compensation for Pakistan’s loss of East Pakistan. The most serious flaw in Pakistan’s policy is that it is not interested in opening up to non-Taliban Afghans, said Khattak, or showing support for the more political rather than militant wings of the Taliban in Afghanistan by insisting the ‘Islamic emirate’ in Afghanistan does not impose its will through the barrel of a gun. There is also the danger of ‘reverse strategic depth’ as Pakistan faces fallout from activities by Afghan militants within its own borders.

In conclusion, Khattak called for the international community to keep a cautious eye on the situation in Afghanistan, so there is no repeat of the terrorism – both in South Asia and globally – which followed when, in the 1990s, the US and other powers turned their backs on Afghanistan.

It is important not to demonise the Taliban, insisted Dr Antonio Giustozzi, a Visiting Professor at KCL and RUSI Fellow, as the group’s current leader, Mawlawi Hibatullah Akhundzada, is serious about achieving peace, if only because it is in the group’s political interest– although there are, of course, spoilers within the Taliban who will seek ways to sabotage the peace process.

Despite widespread support for the Taliban by regional sponsors of Afghanistan, including Pakistan and Saudi Arabia, none can afford to have an Islamic emirate back in Afghanistan, said Dr Giustozzi, as they cannot afford to humiliate or alienate the US once it withdraws. In fact, with their readiness to commit to reforms such as female education, the Taliban today are more liberal and hence palatable than, say, the Saudis, with whom the US has readily dealt. That said, in any coalition government, the Taliban will push for more Sharia law and at least partial Islamisation– something countries such as Saudi Arabia would favour, as it would not be convenient for them to see a secular, democratic government in Afghanistan.

Final panellist Tim Foxley, an independent political/military analyst who has worked in Afghanistan on security issues, reflected on plausible scenarios for Afghanistan over the next few years. He considered a ‘perfect storm’ of problems, including political and economic instability, and corruption, as well as the fall-out of COVID-19, which has left western donors less able to offer aid. Afghanistan today faced a worse situation than in 2014, which was ‘Part 1’, said Foxley. It is now entering ‘Part 2’, with the planned complete drawdown of US troops, a situation unlikely to lead the Taliban to start compromising.

Looking to the future, Foxley envisaged four ‘broad brush’ scenarios, from best to worst. The best case was a Taliban-Afghan government accord based on compromise, with most human rights and democratic issues remaining intact, and consensus from the Afghan people. The second scenario would be a flawed compromise, with some slow and painful progress, but prone to collapse, while the third heralded a stalemate between the government and Taliban, with talks going nowhere, increased levels of violence and a collapse of the military. In the most pessimistic scenario, Foxley saw a slow slide into civil war between various factions. Believing that the Taliban did not yet have sufficient incentive to compromise, he predicted years of ‘more and messier fighting’ ahead.

In his closing address, TDF chair Barry Gardiner MP spoke of ‘too many players’ in this great game, and the need to think about all the regional powers that will scramble for influence post US-drawdown, with the continued civil war, regarded by many observers as inevitable, not only being waged between the Taliban and Afghan security forces. Despite calling on all the countries taking part in November’s ministerial pledging conference to collect funding to support the Afghan peace process, Gardiner did not visualise a rosy near future for Afghanistan, concluding that he was ‘an optimist who could see no rational basis’ for his optimism.

Seminar Report: Brexit And Its Impact On Asia & The Commonwealth