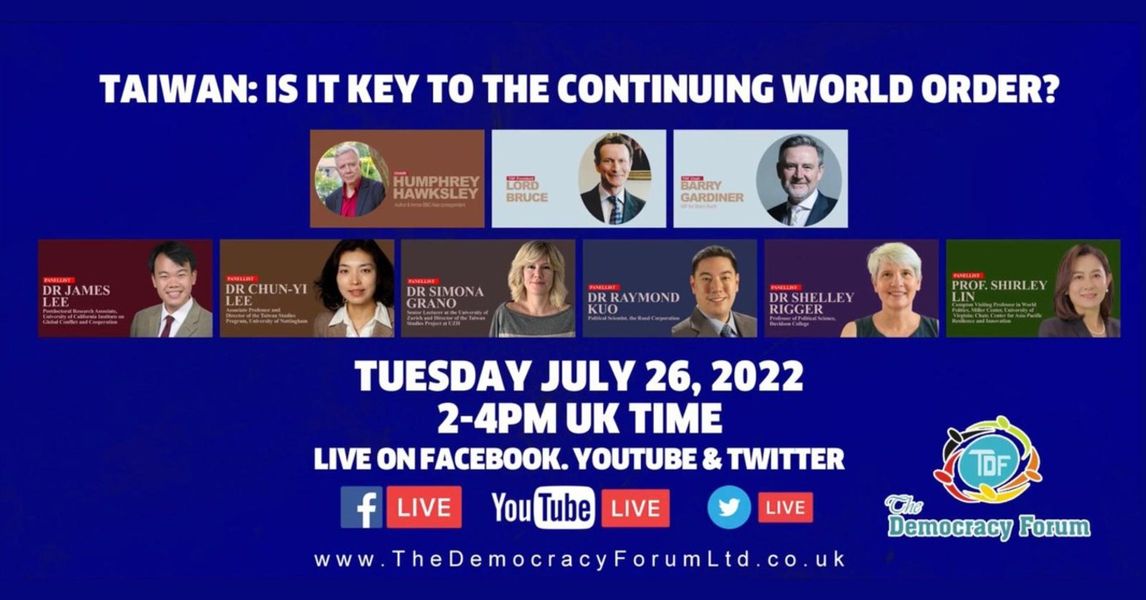 Taiwan’s global significance in terms of trade, technological innovation and democratic values, its complex relationship with China, and the fallout of a potential Chinese invasion were among points for discussion at a recent TDF virtual seminar, titled ‘Taiwan: is it key to the continuing world order?’

In trying to reach a clearer understanding of the perception of a military threat to Taiwan, TDF President Lord Bruce cited former head of US Indo-Pacific Command Admiral (Ret’d) Phil Davidson’s assessment that a Chinese attack on Taiwan would ‘manifest in the next six years’. However, in referring to a recent Japanese government white paper on defence spending that warned of escalating national security threats, ‘including… China’s intimidation of Taiwan, and vulnerable technology supply chains’, Lord Bruce also quoted China’s response as it urged the Japanese government to ‘immediately stop the erroneous practice of exaggerating security threats in its neighbourhood and finding excuses for its own strong military arsenal’.

With Taiwan currently dominating the global market for semiconductor manufacturing, particularly the most advanced chips, Lord Bruce noted that, although the threat of military escalation is considered marginal by specialist risk managers, the prospect of sanctions imposed as an economic weapon to deter aggression is considered much more likely. In either scenario, a concerted plan to reduce the vulnerability of western trade and manufacturing is already underway in the US and EU.

Highlighting the importance of Taiwan’s democratic governance as an alternative for countries which have a strong economic relationship with China, especially in the Asia Pacific, was Syaru Shirley Lin, Compton Visiting Professor in World Politics at the University of Virginia’s Miller Center, and Chair of the Center for Asia-Pacific Resilience and Innovation (CAPRI). Taiwan matters for the world, she argued, not only because it produces the most advanced semiconductors but also because it can be a leader in innovative public policy. As the world’s only Chinese democracy, Taiwan’s achievements in promoting economic development and safeguarding public health through democratic governance can show the path forward for other developing societies in the Asia Pacific.

Indus Water Treaty provides over 70% of glacial water to Pakistan, and less than 30% to India

However, despite its many successes, Taiwan also faces many complex internal threats, as well as external ones from China. Lin spoke of Taiwan’s isolation in the world, and of the ‘five Ps’ – population decline, power generation, political polarisation, parochialism and the pandemic. These issues are at the forefront of people’s minds in Taiwan, even more than the threat of armed conflict with China. The urgent socioeconomic, environmental, and political challenges that Taiwan and other high-income societies in the Asia-Pacific are facing will require innovative and interdisciplinary thinking to solve. In recognition of this, Lin and her colleagues founded CAPRI in Taipei, a non-partisan, independent think tank that recognises the role Taiwan can play in developing solutions and sharing best practices for addressing these problems.

In answer to the central question posed by the seminar, Dr James Lee, a Postdoctoral Research Associate at the University of California’s Institute on Global Conflict and Cooperation, gave a resounding ‘yes’. This is because the threat that Taiwan faces raises the question of whether or not the international order is able to resist attempts to annex territory by an authoritarian great power, and if China were successful in annexing Taiwan, it would threaten a fundamental pillar of the post-World War II international order. Since many countries that have a One China policy do not recognise Taiwan as an independent state, China wants us to think that this means we have to recognise Taiwan as part of China. But there is a third path, said Dr Lee, which is that taken by the US, the EU, UK and others: they do not recognise Taiwan as an independent state, but nor do they recognise Chinese sovereignty over Taiwan. Dr Lee addressed the history of the dispute surrounding this intermediate legal status of Taiwan – including how China’s claim to Taiwan is based on highly contested arguments about what happened after WWII – focusing on the different positions adopted by the US, China, and Taiwan itself.

Digitalisation and Taiwan’s democracy were focal points for Chun-Yi Lee, Associate Professor and Director of the Taiwan Studies Program at the University of Nottingham. Underscoring Taiwan’s importance in trade and in the ‘electronic world order’, she considered how, despite tensions, the China-Taiwan trade connection is still very strong and integrated but, in terms of production, Taiwan is ‘high end’, bringing tech skills and research, while China is ‘low end’, contributing more to the low-skill assembly side of the supply chain. She addressed the ‘hardware of digitalisation’, the importance of Taiwan’s TSMC to the semiconductor global value chain, as well as the ‘software of digitalisation’, Taiwan’s digital democracy, including reference to the 2014 ‘Sunflower movement’, a protest by civic hackers that demanded more open government, with policy and information made simpler for people to understand. Lee discussed, too, how Taiwan had built a ‘digital fence’ during COVID, though not on the basis of state power censoring civic society, as has been seen in China. Rather, Taiwan is to invite civic engineers or ‘hackers’ to work with the government, creating digital means to combat the global pandemic.

Dr Simona Grano, a Senior Lecturer at the University of Zurich and Director of the Taiwan Studies Project at UZH, considered key shifts that have led to changing attitudes to Taiwan in Europe – most notably, the Covid pandemic; China’s increasing attempts to marginalise Taiwan economically and internationally; and the Russian invasion of Ukraine. She touched on mistrust of China engendered by the pandemic, Taiwan’s importance in global supply chains, and the impact the Russian invasion has had on small states within the EU and the greater importance they subsequently attach to having like-minded partners. This includes Taiwan, which, beyond economic ties, shares many values with the West: a system of governance based on democracy, rule of law, respect for human rights, a market economy, etc. Dr Grano also focused more specifically on changes in attitudes towards Taiwan in Italy and Switzerland – her homeland and adopted country respectively – which are not, she argued, happening in a vacuum but at a European level. In the wake of Russian aggression in Ukraine and the ideologically charged debate on democracy versus autocracy, Taiwan shows that Chinese values are not incompatible with Western values. It is important, therefore, Grano concluded, to communicate to China that the West will not stand idly by while Beijing attempts to change the status quo.

Also bringing in the Taiwan-Ukraine parallel was Dr Raymond Kuo, a Political Scientist at the Rand Corporation. Would an invasion of Taiwan by China inspire the same reaction as Russia’s invasion of Ukraine, he wondered, even though it is not officially recognised by most countries? There is widespread recognition that a Chinese invasion of Taiwan would still be a violation of sovereignty, as there are other types of sovereignty than territorial.Kuoalso argued that Taiwan has the added advantage of being a much larger economy than Ukraine, more integrated into global trade flows, and integral to East and Southeast Asian security planning. In highlightingTaiwan’s significance in the global order, he concluded that it is critical, as it activates territorial sovereignty concerns for other countries, and is a litmus test for, in particular, other Asian countries regarding the durability of the current world order.

Shelly Rigger, Professor of Political Science at Davidson College, focused on the historical angle vis-à-vis Taiwan, and its relationships with the PRC and the US. She considered the connection between identity and democratisation in Taiwan, and how the PRC, as well as Chinese nationalism from both within Taiwan and across the Taiwan Strait, have become obstacles to Taiwan’s identity and self-actualisation, and an enemy of democracy.The critical attribute that Taiwanese want to maintain is not something ethnic or cultural, she believed, but their democracy. Ultimately, Taiwanese identity is not the instigator of conflict across the Taiwan Strait. Rather, said Rigger,the real instigators are Chinese nationalism and the demand in the PRC by the Chinese Communist Party leadership that Taiwan must accept not only a cultural identity as part of the Sinophone world, but also a political identity as part of the People’s Republic of China.

In summing up the event, TDF Chair Barry Gardiner MP said it is difficult to see how any military invasion of Taiwan could be successful– after all, Ukraine fought back fiercely, despite having a greater and more recent entanglement with Russia. So, if a union between China and Taiwan doesn’t come voluntarily, he concluded, it is unlikely it can come at all.