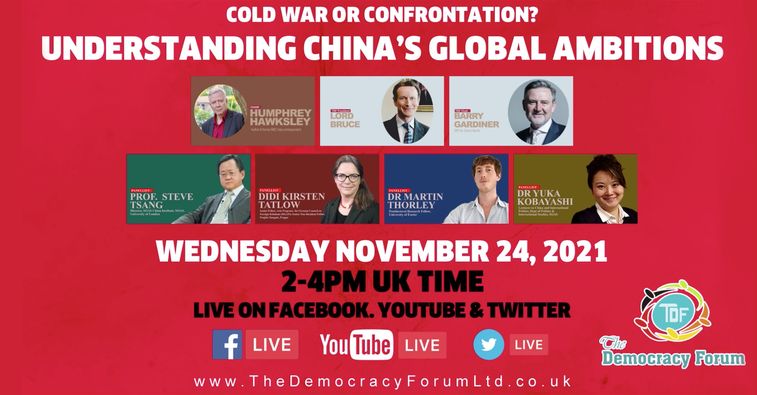 The world’s open societies are struggling to define the interconnected and in some ways hostile situation they currently find themselves in vis-à-vis China, given the CPC’s goal of directly or indirectly controlling the world by the mid-21st century. This was among views expressed at a virtual panel discussion hosted by The Democracy Forum, titled ‘Cold war or confrontation? Understanding China’s global ambitions’.

Following the recent Xi-Biden virtual meeting, TDF President Lord Bruce noted that US-China relations could be seen as more about competition than confrontation and conflict. However, fear of confrontation no longer seems such a dim prospect, in light of August reports that the PLA had successfully deployed a hypersonic-capable nuclear missile on two or three occasions in the previous fortnight. Despite the Pentagon’s conclusion that the PLA is set to quadruple its stockpile of intercontinental weapons by the end of the decade, and acknowledgment that China is close to achieving a partial ‘launch-on-warning’ posture, enabling an effective counterstrike rather than simply waiting to retaliate, Lord Bruce said it was unclear if the Biden administration shares the Pentagon’s anxiety that America’s dominance is now clearly threatened by the demonstration of China’s military capability.  Yet any suggestion that the US is asleep at the wheel in the face of a relentless escalation of Chinese military preparedness is deeply unsettling to many countries in Southeast Asia, and increases in Beijing’s nuclear forces could potentially enable it to win a conflict with the US over Taiwan by neutralising the threat from American nuclear weapons. Perhaps the purpose of NATO’s foundation over 70 years ago, concluded Lord Bruce, offers a relevant model for a collective security approach to anticipating and containing China’s military ambition in the Asia-Pacific region.

Xi’s ambition, encapsulated in his ‘China Dream of national rejuvenation’, is to secure China’s uninterrupted rise and make it great again

Professor Steve Tsang, Director of the University of London’s SOAS China Institute, examined China’s global strategy, highlighting how President Xi has brought ideology back into the People’s Republic of China, dubbed ‘Xi Jinping Thought’. Prof. Tsang examined Xi’s ambition, encapsulated in his ‘China Dream of national rejuvenation’, which is to secure China’s uninterrupted rise and make it great again. Its global strategy is to make the world safe for authoritarian systems, as the US had one tried to do for democracy – although Xi’s brand of socialism is not for export, said Prof. Tsang. Rather, it isa type of ‘beauty contest’ of values, presenting a model of China that is clearly superior to democratic systems, while not actually trying to subvert them.  Xi also aims to assert a leadership role for China in the world, particularly at the UN and other international agencies, and to establish jurisdiction over all territories China claims as its own – particularly its ‘sacred territory’, Taiwan.

From science to the arts, Didi Kirsten Tatlow, a Senior Fellow, Asia Program, at the German Council on Foreign Relations (DGAP), highlighted the decades-long efforts by the CPC to transfer economy and state-building technologies from industrialised countries in order to fuel its neo-totalitarian rise. Its goal? To directly or indirectly control the world by 2049, at the latest. As a result, said Tatlow, open societies are struggling to define the highly interconnected, and in some respects hostile situation they find themselves in today. For now, we are in more of a ‘messy wrestle’ than a ‘Cold War’ or confrontation; yet increasingly, the latter two are also taking shape. Some form of decoupling is inevitable, given the tight connection between security needs and the technological nature of our future, said Tatlow, who also described how the CPC acquired foreign technology ‘by multiple means’, and what this means for the world. China does not want to control the rest of the world, she said, but wants, rather, to pacify us, which leads to aggressive outreach into our societies.

The suitability of using the term ‘Cold War’ in terms of the challenge the world faced from China was raised by Dr Martin Thorley, a Postdoctoral Research Fellow at the University of Exeter. Although the challenge is of a similar scale to the Cold War of the 20th century, the conditions are radically different – for instance, a much greater entanglement of the corporate and political worlds, with offshore capital linkages, transnational supply chains, revolving door appointments, and multinational corporations that depend on Chinese market access, and the manner in which they can be used as channels of influence. We must, therefore, prepare for a different type of encounter, and indeed, it could be detrimental to our world view and calculations to consider the situation in Cold War terms. Today, what we have is less of a Cold War, more of an uneven engagement; more of a wire mesh than an Iron Curtain. Whilst the Chinese Party State’s global approach is forged in Beijing, said Dr Thorley, it is tempered by the international landscape, and constraints that places on strategy.

For Yuka Kobayashi, Lecturer in China and International Politics at the Dept of Politics & International Studies, SOAS, China’s global ambitions can be summarised by its ‘Two Centennial Goals’ of becoming both a strong and a wealthy nation. It is not a surprise, she said, that a nation that is rising economically and militarily will have an impact on the international community. However, framing this in terms of a ‘Cold War’ or ‘confrontation’ is, she believed, myopic. Whilst China’s rise will have an impact on security, and its approach within the spheres of cyber, data and freedom of navigation will create challenges for like-minded states in the ‘free and open Indo-Pacific’, Dr Kobayashi said that, given the most urgent and pertinent challenges we face today are climate change and the Covid-19 pandemic – both of which require cooperation with China – in a globalised, interdependent world, we need to move beyond the ‘Cold War’ narrative and create a more rigorous framework for cooperation with China.

In his closing remarks, TDF Chair Barry Gardiner, MP called the event a ‘fascinating exploration’ of the central question, culminating in definite answers. It had raised questions about how liberal democracies should interpret the word ‘democracy’ and its values, and whether our democratic systems, liberal as they are, offered all the freedoms, such as freedom from want and hunger, a safe place to live, that are their essential purpose.