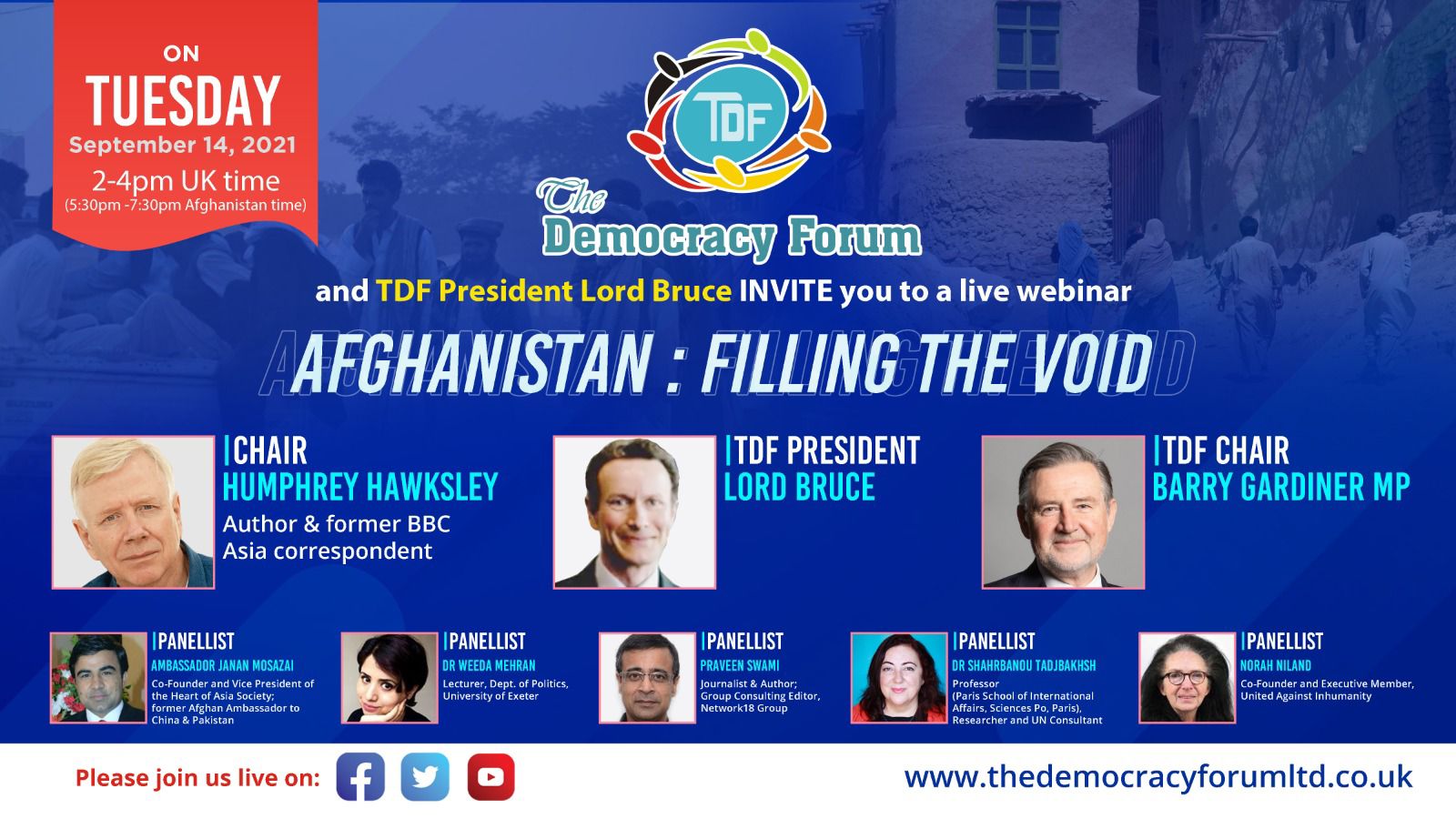 A recent TDF seminar probed the aftermath of the US exit from Afghanistan, considering which actors might step into the vacuum, and the ensuing challenges and opportunities

Following the withdrawal of US-led coalition forces from Afghanistan and the Taliban’s swift takeover, a new reality now exists for the country and the region. As fresh opportunities and challenges arise for Afghanistan’s neighbours to step into the breach, The Democracy Forum hosted a virtual seminar to debate this timely issue, moderated by former BBC Asia Correspondent Humphrey Hawksley.

‘What can we anticipate from the new regime?’ wondered TDF President Lord Bruce in his opening address, given that the Taliban is embarking on a campaign to win hearts and minds and offer a credible alternative to the Ghani administration. But, with the new cabinet in Kabul dominated by Taliban hardliners and appearing to opt for ‘diplomatic non-engagement’, Lord Bruce believed the international community would struggle to find meaningful leverage. He also cast doubt over any immediate advantage Afghanistan’s neighbours might hope to gain from US withdrawal, saying that China and Pakistan have ‘a real problem with the Taliban’, as do Russia and Iran. Pakistan’s predicament, in particular,as a ‘supplicant of both China and the US’,would surely determine its response to the change of regime in Kabul, with possible repercussions including renewed tension with India.

Addressing the security situation and the Taliban’s ability to govern Afghanistan was Dr Weeda Mehran, a Lecturer at the University of Exeter’s Dept. of Politics, who has personal experience of life under the Taliban. She considered key challenges facing the new government – the brain drain, as it will crumble without the support of an educated workforce, and the economy, with a collapsing banking system and depreciating currency – and the current caretaker cabinet’s problematic lack of inclusivity, with no Hazaras, Shia or women representatives. Moreover, 17 of the 33 cabinet members, including the new minister of the interior, are on UN and FBI terrorist lists, while the Taliban has released thousands of IS, al-Qaeda, TTP and other prisoners, which could cause huge security challenges in Afghanistan if they decide to confront the regime. In light of all this, and that criteria for selection to government office are a religious education and a prior record as Taliban fighters, the narrative of inclusivity and change the Taliban have promoted is untrue – also evidenced by, for instance, the re-establishment of the dreaded ‘virtue and vice’ ministry. Indeed, the only change from the mid-90s to now, said Dr Mehran, is that the Taliban are more PR savvy, and watchful of their international image.

UN Consultant Dr Shahrbanou Tadjbakhsh, a Professor at the Paris School of International Affairs, Sciences Po, looked at how the region can engage with the Taliban, offering an analysis of the security concerns and interests of regional countries, and what regionalism can do. She spoke of the Sept. 8 meeting of foreign ministers from Afghanistan’s neighbouring countries to make a joint statement – a meeting tellingly convened by the foreign minister of Pakistan, the country with the most leverage in Afghanistan. This statement pointed to various regional concerns, emphasising the role members of the security council have to play in continuing to take responsibility for peace and security in Afghanistan, and the need for regional countries to set aside their differences and work together – an opportunity given impetus by the US defeat. There is potential for economic progress, but it is contingent on whether the Taliban can answer the security concerns of the region, and on regional cooperation rather than continuing rivalries. Dr Tadjbakhsh also highlighted how the Taliban represent the interests of some regional countries more than others, with Pakistan (whose ISI head recently visited Afghanistan) and China (through investment projects such as the BRI and SCO) having greater leverage in Afghanistan than other neighbours such as India and Russia. Ultimately, for a regional balance to be created, the Taliban have to appease security concerns and play neutrality in a multi-vector foreign policy. But, due to their dependence on funding from China and political support from the international community, she did not hold out much hope for such neutrality.

Norah Niland, Co-Founder and Executive Member of United Against Inhumanity, examined attitudes of Afghanistan’s neighbours to the evolving and intensifying humanitarian situation, and the implications of this for Afghans in need of urgent humanitarian action. She noted that, while the global humanitarian scene has changed significantly since the end of the Cold War, then again since 9/11, for the most part, Western powers have remained the dominant actors, both in terms of funding and in terms of setting policy. She said it was important that Afghanistan is not treated as a pariah state, and has access to the country’s reserves in US banking. Indeed, Afghanistan’s neighbours, near and wide, need to take responsibility for the type of politics that have led to the current situation, and for building back the country, which has changed since the 90s and 9/11, with a younger population, more prevalent media, greater access to health care and a stronger civil society. Humanitarian action, Niland concluded, is not a substitute for some of these gains that have been made, which should be acknowledged and supported as we maintain faith in Afghan civil society to push back against measures that are unacceptable.

Broadening the scope of the webinar’s central theme, journalist and author Praveen Swami examined how the global system ought to cope with long civil wars, terrorism and collapsed polities, given the clear reluctance of the United States to do so. He focused primarily on the lessons learned in this regard in Afghanistan, as well as other states facing similar challenges, and argued that there is an urgent need for regional states, as well as the international system, to take a long, hard look at this, since the conflicts themselves are not going to end anytime soon. The forever wars ignited since 9/11 are showing no signs of ending, yet Western powers are showing an ever greater disinclination to commit resources and lives to discharging their ‘imperial obligations’ to keep peace and global order. When it comes to maintaining order, Swami said that counter-insurgency is most effective when it can help build civil and judicial institutions, and state structures to maintain everyday life, yet the rapid turnaround of administrators and bureaucrats in states such as Afghanistan is problematic. Given that the price of intervention outweighs the costs of doing nothing, he also argued that China and other regional powers were unlikely to bring any serious financial muscle to Afghanistan, nor did he see that the US would be willing to deal with the messy business of policing the world. Some regional states might make limited concessions to humanitarian aid in the neighbourhood, and make some resources available to their clients and proxies in the neighbourhood. But Swami did not see them being willing or able to invest either the financial or state-building capital needed to create a functional system of state authority in Afghanistan. He believed there is an urgent need for a multilateral dialogue to replace the single-point dependence on Western states, regarding global peace-keeping, and global financing of state-building and polity-building. If we fail to do this, Afghanistan will just be the first in a long series of crises that will unfold across the rest of this century.

Summing up the event, TDF Chair Barry Gardiner MPdrew attention to Western reluctance to see the withdrawal from Afghanistan as a defeat. The US’s failure in the country has not only regional but also global implications, and Gardiner said we must look at what comes beyond the era of the US as global policeman. He also lamented troubling moral issues such as the way the West was hiding behind the idea that we don’t want to support criminal gangs bringing Afghan refugees into Britain illegally, yet we have closed down safe and legal routes. Do we have the will to support the values we preach? he asked – to which the answer was, sadly, no.

Seminar Report: Country at the crossroads