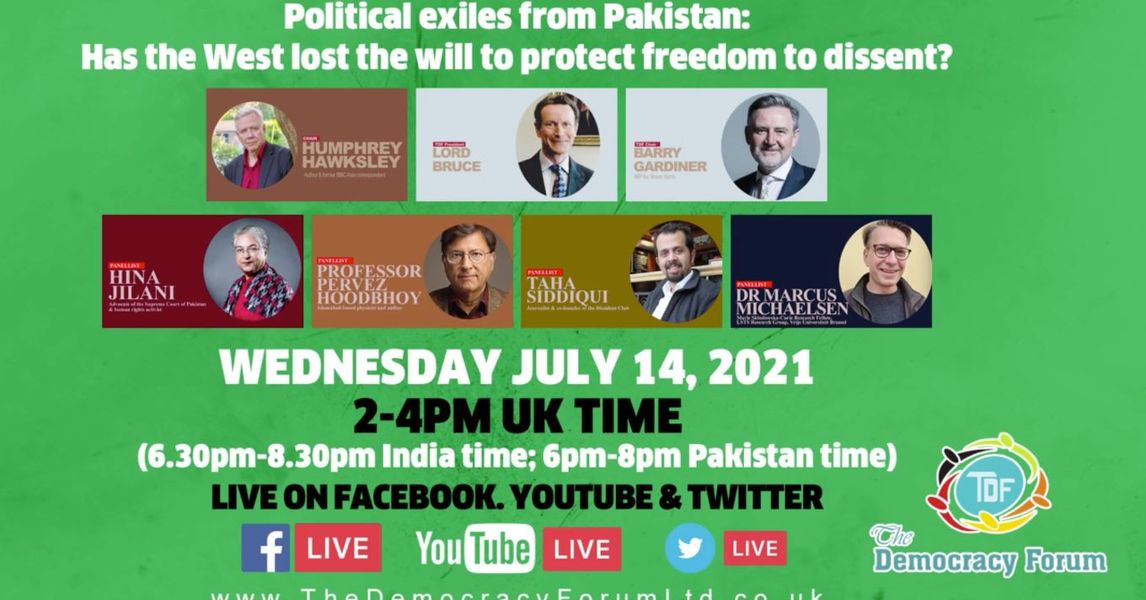 A June webinar hosted by The Democracy Forum attempted to fathom Pakistan’s recent overtures for peace with India, and asked: ‘Is China the elephant in the room?’

The plight of exiled dissidents from Pakistan, and the extent of the West’s resolve to protect them, was the theme of a recent webinar hosted by The Democracy Forum. This is a debate that not only goes to the heart of Pakistan’s character as a country, said moderator and former BBC Asia correspondent Humphrey Hawksley; it also goes to the heart of the democratic world’s determination to protect those who feel threatened.

In his opening address, Lord Bruce, President of The Democracy Forum, noted that the seminar had been convened in response to ‘growing evidence of extra-territorial repression of political dissidents’, a trend to which Pakistan is a major contributor. The worrying increase in this activity in recent years not only reflects the systemic erosion of human rights and freedom of expression in several South Asian countries, he added, but it also represents a serious threat to the integrity of our open societies in the west.

Lord Bruce cited various historic examples of nation states threatening and apprehending their dissenting nationals, sometimes well beyond their borders, with impunity, before touching on how Pakistan’s record of upholding basic human rights and freedom of expression has ‘long been a source of grave concern’. In an ‘unmistakably Orwellian twist’, the Pakistan government’s proposed enactment of the Pakistan Media Development Authority (PDMA) Ordinance 2021 will permit the repealing of all current media related laws. Against this background of unambiguous repression, said Lord Bruce, we need to reassure ourselves that the west lacks neither the will nor the means to censure the Khan government for the deliberate breach of these freedoms.

Human rights activist and Advocate of the Supreme Court of Pakistan Hina Jilani expressed deep concern about the repressive and ever more authoritarian policies that are being adopted by the Pakistan state. She feared it has become difficult to predict a future for civil society in Pakistan because, in an environment of waning multilateral systems, controversy surrounding international intervention on human rights and a need to redefine notions of national sovereignty in this regard, people in countries such as Pakistan are left with no choice but to flee. While a strong community of human rights defenders is paramount, stressed Jilani, current policies in Pakistan are forcing people to seek refuge elsewhere, thus depleting the human rights community, and weakening its resistance, and that of civil society in general, to the repressive form of governance that has existed for decades.

The denial and lessening of diversity in Pakistan has triggered social conflict, political tensions and religious division, and there is little room for an increasingly eroded civil society to balance state power and security structures. Jilani pointed out that no government in Pakistan has ever dared to bring in a law to hold intelligence agencies such as the ISI accountable, and the current government has abdicated its role in making policy. But, concluding on a more optimistic note, she believed South Asia is a region where there are possibilities of initiatives bringing people together. And, while the west is keen to safeguard its own interests, but less so when it comes to protecting wider rights, she did not think it has completely abandoned its efforts to promote and protect human rights in authoritarian cultures.

Diminution in religious diversity was also an area of concern for Islamabad-based physicist and author Professor Pervez Hoodbhoy, who said Pakistan’s society was now completely homogenised, with the depletion of minority communities and forced conversions. Those who go into exile, no longer tolerated in their own country, are marginalised and excluded, but they could be seen as the ‘lucky’ ones, compared to those such as Sajid Hussain and Karima Baloch, who both died in mysterious circumstances while in exile in Sweden and Canada, respectively.

Underscoring the universalist nature of human rights, Prof. Hoodbhoy insisted that, if we speak up for the oppressed in Pakistan, we must speak up for minorities and persecuted people everywhere, with no political agenda. He considered the leverage that the US, UK and Europe possess in their dealings with Pakistan, and said they still have plenty, for example, through the IMF and FATF, as Pakistan does much more trade with the west than with its ally China, and thus fears economic penalties and repercussions. It is therefore up to the west to make judicious use of such political instruments for a moral purpose, to help ordinary Pakistanis, who want democracy and freedom, and not to be ruled by the military.

Journalist and co-founder of the Dissident Club, Taha Siddiqui, reminded the audience that, for Pakistani exiles, their families often remain in Pakistan, facing harassment and even threats, such as visits and interrogations by the ISI. So while exile may be safer for the exile, the cases of Hussain, Baloch and others proved there was no absolute safety, as also evidenced by Siddiqui’s own experiences of surveillance and threats from Chinese and Pakistani officials at the Dissident Club.

Is the west doing enough to help these exiled dissidents? Siddiqui wondered. In some ways, such as providing documentation, a haven and publicity through media, it is; but in others, it is failing, as it is more wary of upsetting diplomatic relations and geopolitical interests with certain countries. He also questioned why Pakistan embassies globally are hosting intelligence operatives who keep people under surveillance, saying they should be expelled to show that such behaviour won’t be tolerated on foreign soil. And even as the Afghan Taliban are collecting funds in Pakistan, the FATF has given Pakistan time to perform reformative legislative actions, putting it on a grey- rather than a blacklist. Ultimately, argued Siddiqui, the west needs to take concrete measures to send a stronger message that human rights matter more than geostrategic interests, and show dissidents they are not only protected on paper, but in reality.

Attempts to silence dissidents across borders by way of digital threats against exiled activists was the focus for Dr Marcus Michaelsen, Marie Skłodowska-Curie Research Fellow of the LSTS Research Group at Vrije Universiteit Brussel. While transnational repression and the ability of authoritarian regimes to reach out across borders to control, punish or silence critics was not new, he said, with more advanced technology, it has increased in scope and intensity.

Direct methods such as threats and attempted assassinations are embedded into a much broader set of subtle tactics, such as surveillance, property confiscation and cancellation of passports, and a whole host of countries are engaged in this, including China, Saudi Arabia and Pakistan. Although our idea of authoritarian regimes are still shaped by the Berlin Wall, said Michaelsen, today’s dictators don’t hide behind walls. Globalisation and social media have presented greater opportunities for regimes to extend their reach across borders, using more aggressive forms of targeted surveillance to pressure activists into self-censorship. Authoritarian regimes also exploit global networks for repression through manipulation of the Interpol system, such as ‘red notices’ issued to arrest dissidents abroad, and benefit from host states’ increasingly strict immigration policies. This shows that these host states are deeply implicated in practices of repression across borders.