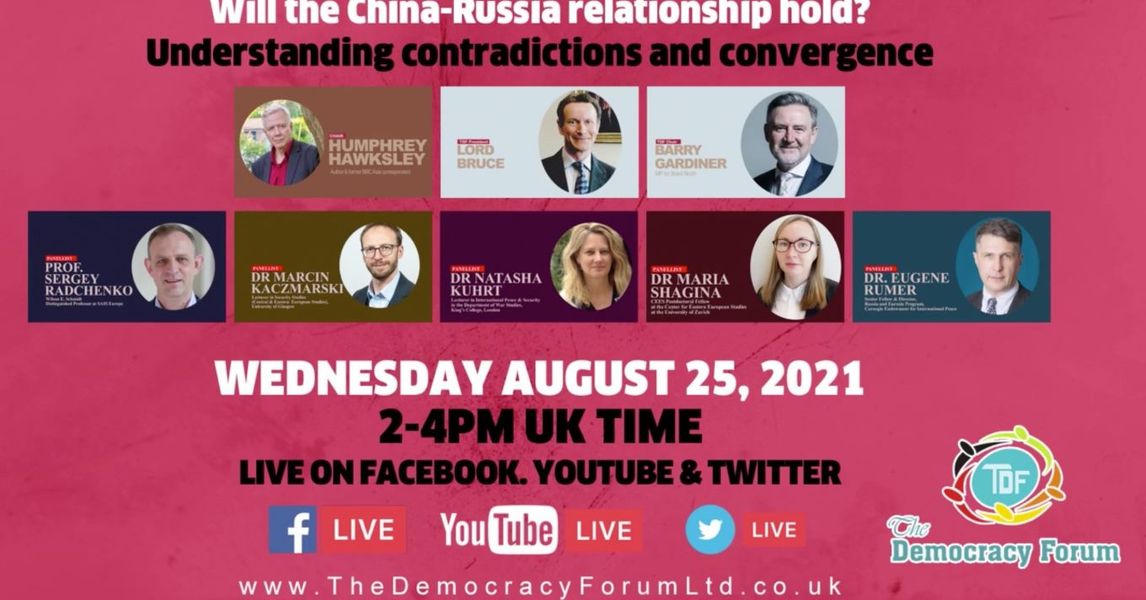 A recent Democracy Forum seminar examined spheres of both consensus and divergence in relations between Beijing and Moscow and asked: will the relationship hold?

With fresh challenges emerging to America’s superpower status, further fuelled by the chaos in Afghanistan, The Democracy Forum’s latest virtual event on global geopolitics and shifting power dynamics brought together a panel of experts, chaired by former BBC Asia correspondent Humphrey Hawksley, to analyse Sino-Russian relations past, present and future.

Opening theevent, TDF President Lord Bruce wondered whether the relationship between Russia and China was ‘a tacit alliance, a marriage of convenience, or something more sinister’. Whether the Chinese-Russian relationship is founded on a pragmatic wish to reap mutual and individual benefits, or a desire to undermine the current democratic world order, the challenge facing Washington is surely to understand how it may succeed in drawing Russia away from the orbit of Chinese hegemony. This, said Lord Bruce, is the critical diplomatic prize that President Biden needs to win – though this was a view not necessarily shared by the panellists.

Prof. Sergey Radchenko, Wilson E. Schmidt Distinguished Professor at SAIS Europe, set out the broader historical perspective of Sino-Russian relations. In the early period of this centuries-long relationship, China had the upper hand, but by the 19th century,Russia had become more assertive and imperialistic, thus threatening China’s very existence. The key period, said Radchenko, was the 20th century, after the Chinese Communist Party came to power in 1949, when the two nations signed the ‘unbreakable and eternal’ Treaty of Alliance, which nevertheless fell apart in just under ten years. This was due, in part, to the rigidly hierarchical nature of Sino-Soviet ties in the 1950s, with Russia at the top, which China resented. As each country had divergent foreign policies and agendas, and each was prone to perceive the other as deviating from (and hence betraying) their shared Marxist-Leninist ideology, their alliance fractured.

The Sino-Russian rapprochement we see today – which began not with Putin and Xi but with Brezhnev – began to accelerate from the 1960s, through the 70s to the 1980s, and was reinforced by Gorbachev, who recognised China’s importance for the Soviet Union/ Russia. Ultimately, it does not matter who the leaders of either country are, said Radchenko – history has taught Russia and China that if their relationship falls apart, it harms both. Good relations are in their mutual interest, as neither wants to be played by any third party such as the US.

Addressing the extent to which Russia and China share ideas about regional and global order was Dr Natasha Kuhrt, Lecturer in International Peace & Security at KCL’s Dept of War Studies. She did not regard it as necessarily inevitable that Sino-Russian relations had become as robust and multi-faceted as they are today, given that, after the collapse of the Soviet Union, much emphasis was placed on Russia repairing relations with Japan, which was seen as more ‘Western’ and advanced than China. This collapse reconfirmed China in the wisdom of its own path of economic liberalisation without democratisation, human rights or freedom of speech – a view Putin himself subscribes to, it could be argued.

Regarding the normative dimension of Sino-Russian ties, both countries place heavy emphasis on Westphalian sovereignty, said Kuhrt, whilst trying to retain primacy in their respective regions and also resisting concepts such as responsibility to protect civilians, as they see this as a code for the insertion of human rights provisions. This is a broader resistance to the Western neo-liberal world order. Kuhrt also spoke of the possibility of Russia and China stepping into the vacuum of Afghanistan, due to a fear of the spread of fundamentalism and security problems into Central Asia, and highlighted their concerns over separatism, which both have dealt with. These common concerns, and a shared resistance to regime change, has become a particularly important part of Sino-Russian relations.

Eugene Rumer, Senior Fellow & Director at the Russia and Eurasia Program, Carnegie Endowment for International Peace, considered the drivers of Russian-Chinese relations, challenging notions from Washington that Russia will come to see that the real threat to them is from China, and asserting that Russian-Chinese relations are based on sound strategic logic and complementarity. In stressing the strength of the Sino-Russian relationship, he argued that we would have more cause to worry if it were bad, and he questioned the merits of the US/West trying to split Russia from China.

The bilateral relationship succeeds based on three critical pillars: political/ideological compatibility (with both embracing authoritarian politics and viewing the promotion of democracy as an existential threat), economic complementarity (with one resource-rich and the other a manufacturing powerhouse), and geopolitical complementarity, as their interests there do not overlap. Vis-à-vis China and Russia’s national security and defence, gains they have derived from their improved relationship is that they don’t have to deploy so many divisions either side of the border, as they did during the Cold War. Geopolitically speaking, Rumer asserted that the partnership is a great multiplier for both, though more so for Russia, due to its diminishing capabilities. Despite concerns from some in the Russian security establishment about the imbalance, including militarily, in this strategic partnership, Rumer concluded that it has strong foundations, is well thought out, benefits both and will endure

Conversely, for Marcin Kaczmarski, Lecturer in Security Studies (Central & Eastern European Studies) at the University of Glasgow, the focus was on the limitations of the Sino-Russian relationship, as he argued that the two countries are far from establishing a revisionist anti-Western alliance. While the relationship has undoubtedly evolved in recent years, Russia and China have three main ‘meaningful limitations’ to what each wants to and can do to support the other. One is a lack of support for each other’s most aggressive territorial claims (eg lack of Chinese support for Russia’s annexation of Crimea, and Russia’s lack of support for Chinese territorial claims in the South and East China Seas), and also lack of support for Russian primacy in broader Eurasia, and for China’s primacy in East Asia. Although Moscow tries to maintain neutrality regarding China’s quarrels with its neighbours such as India and Vietnam, Kaczmarski expressed doubts about the durability of this balancing act on the part of Moscow, given how asymmetric Sino-Russian relations have become.

The second limitation concerns Russia and China’s different expectations vis-à-vis the external world and international order, as China needs a degree of stability with Europe, while Russia thrives on instability as it sees this as offering opportunities. A third limitation is the growing asymmetry in what China and Russia can or will offer each other, especially what Russia cannot offer China in terms of political and military security, high technology and economic/financial opportunities, areas that will decide the Sino-American conflict. So, while the West still faces parallel challenges from Russia and China, a tight coordination of Sino-Russian pressure against the West is still only a distant possibility.

It is important to note that the West simultaneously over- and underestimates the Sino-Russian relationship and needs to unpack its complexities. This was the view of Maria Shagina, CEES Postdoctoral Fellow at the Center for Eastern European Studies at the University of Zurich, who analysed Russia-China economic and energy ties since the introduction of Western sanctions. Russia and China are strategically autonomous actors, though economic convergence is the pillar of Russia’s pivot to Asia, and to China in particular, and both share a hostility to the US-led world order. However, China has profited from globalisation, while Russia is a system disruptor, as illustrated by its actions in Syria and Ukraine.

So, this is not a marriage made in heaven, said Shagina, but it works. China gives Russia the international prestige it craves and there is economic complementarity, but the trade balance is very asymmetric, with China’s exports to Russia twice as many as Russia’s to China, and Chinese FDI to Russia very marginal. Hydrocarbons are the glue that holds the two countries together, though China is not dependent on Russia for oil and gas as it has many suppliers. With the introduction of Western sanctions, there has been an acceleration of Russia’s pivot to China, and China will have better leverage with Russia due to these sanctions. However, Moscow will want to avoid over-dependency on China.

Summing up, Barry Gardiner MP, Chair of The Democracy Forum, predicted that a natural evolution will take place over the next few decades as a result of energy policies and the Sino-Russian energy relationship. China has taken climate change seriously in a way that Russia has not,so they will diverge on this issue, with the Arctic region as a key area of divergence. This growing asymmetry between the two parties is real, Gardiner concluded, as they are both going in very different directions long term, and we need to think about a global response to that.