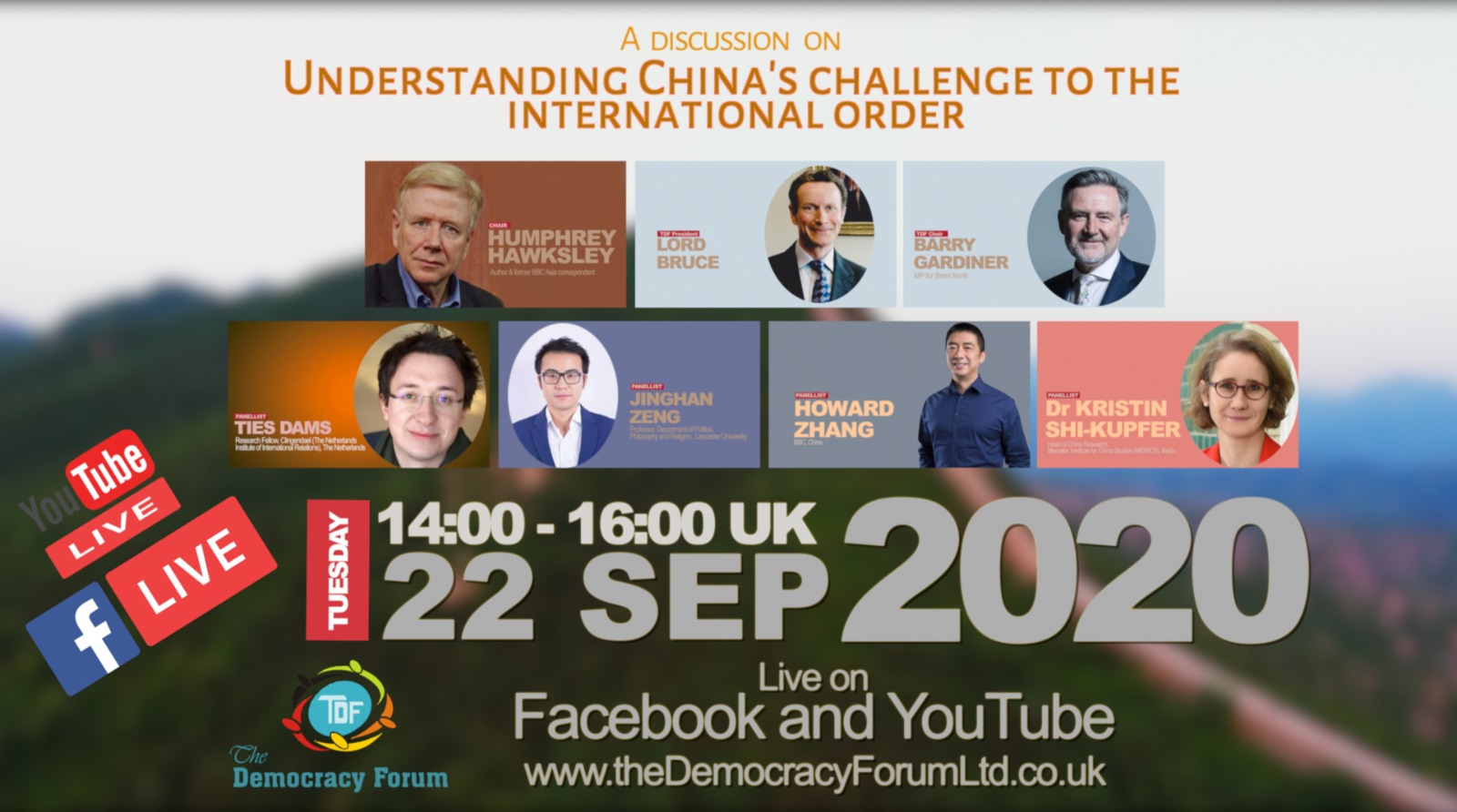 Understanding China’s challenge to the international order was the focus of The Democracy Forum’s September 22 webinar, which brought together four prominent speakers to discuss this topical issue, and consider how Western democracies might wisely respond to it.

As chair of the event, Humphrey Hawksley offered a brief overview of the current US-led international order, which was ‘born of the catastrophe of war, but is now creaking at the seams’. As the ‘new kid on the block’, China wants a bigger seat at table, said Hawksley, and is hence testing boundaries and threatening to set up a new system, as its antagonism with the US has become a war of ideologies: autocracy versus democracy.

In his opening address, TDF President Lord Bruce said that, despite China’s assurances to the world that its foreign policy intentions are sound – for example, vis-à-vis its Belt & Road Initiative –this argument is becoming less and less tenable. Quoting the philanthropist George Soros’ description, at the 2019 World Economic Forum, of Xi Jinping as ‘the most dangerous opponent of open societies’, Lord Bruce argued that he essential challenge for the international community in the face of Chinese aggression is to maintain a collective front, as China is expert at breaking the unity of an alliance by offering an inducement to the weakest link.

However, we are now, he noted, witnessing a collective pushback against China in the wake of its failure to control the COVID pandemic at home and contain its spread overseas.  Lord Bruce also made reference to a recent debate on Chinese territorial aggression on India’s land borders – which is affecting many neighbouring countries as well, including Bhutan, Brunei, Nepal, Taiwan and Vietnam – and the subsequent need for India to challenge the ‘One China’ approach that has long underwritten its foreign policy.

Examining the strategic objectives that lie behind China’s foreign policy, RUSI’s Charles Parton said that, for all countries, foreign policy is simply domestic policy played out abroad, though all the more so in China’s case. As an illustration, he cited China’s BRI – which he viewed as domestically motivated in its origins – as ‘a slogan’ behind which lies the important reality of ‘globalisation with Chinese Communist Party characteristics’.

For Parton, there were six main driving forces behind China’s BRI, including economic stability and prosperity, closing the income gap between the east and west provinces, and the need to develop and stabilise countries across the border to neutralise extremism. The main aim of the CCP is to maintain its monopoly on power, he said, to which end it spends much time legitimising that power through, for example, a push towards continued economic prosperity, respect for Chinese culture and nationalism/territorial integrity. On this latter point, Parton stressed that none of our relations with China can ignore what goes on in Hong Kong or the South China Sea, as this impacts hugely on the West’s relationship with Beijing.

While the West is keen to seek the best possible relations with China, said Parton, we have to look at the realities, such as Xi Jinping’s talk of hostile foreign values, and the infamous Document 9, which repudiates every single key western value on which our societies are founded. We must bear in mind, he concluded, what the Chinese Communist Party is rather than what we would wish it to be.

Ties Dams of Clingendael shed light on China’s need to sow doubt about the resilience and sustainability of Western open societies, saying we shouldn’t underestimate the deeply historic mistrust of openness as a concept within the Chinese state, nor the defensive, geopolitical and philosophical aspects of this mistrust. The country’s self-image as a ‘fallen star’ has everything to do with this sense of mistrust, and as China becomes increasingly offensive (though maybe through defensive motives, argued Dams) and propagandistic, the big question in engaging with China is how to break this cycle of mistrust of the open society, which it sees as ‘chaotic, fragile and offensive’.

As Chinese values work their way into Europe, Dams highlighted the need for structural reform of the EU, which risks sacrificing its own openness by becoming more protectionist and distrustful of other open societies, including its partners. It is important therefore, he concluded, that the West should become less reactive towards China’s rise, as this may reinforce China’s attitudes towards open societies, and instead focus on innovating its own systems, becoming more competitive and trying to break some of the cycle of distrust in the open society.

Joining the webinar from Chongqing, China, Professor Jinghan Zeng of Lancaster University’s Confucius Centre opened his talk asking, ‘What is global order, and who decides rules and norms in the current global order?’ He queried the common narrative of China as the country that wants to change or overthrow the global international order, adding that China’s challenge is not unique and should be understood within the context of the BRICS nations, all of whom are unhappy with the existing rules crafted by the US. Zeng spoke of today’s power transition from west to east and north to south, which China is at the centre of. There is a shared dissatisfaction with the liberal international order among all the BRICS nations, said Zeng, as it fails to reflect the interests of non-Western powers – although he acknowledged that they are not a coherent group, and would not be able to offer an alternative global order. Zeng also wondered if the transition would be peaceful or not, agreeing with Charles Parton that issues regarding Taiwan and the South China Sea are ‘quite concerning’ and all parties should be responsible for what happens in these regions.

Regarding the biggest threat to the international order, Professor Zeng argued that it is not China but probably the US, under the ‘unpredictable, nationalistic and instrumental’ leadership of Donald Trump, which is damaging – whereas China has shown commitment to various international organisations such as the WHO. President Trump’s personal style of leadership has led to many reflections in China on US liberal democracy, and plans to ‘decouple’ US-China relations in the run-up to the presidential elections is potentially bad for the entire world, as it might escalate a Chinese response.

Zeng also considered China’s growing ideological confidence in its political system and values as a new world has emerged, in which American liberal democracy is no longer the final evolutionary point of governance.

For Howard Zhang, the topic for discussion was how China’s state-sponsored propaganda machine functions on social media, both inside and outside China, and the massive impact that has on the overseas diaspora. Propaganda is, said Zhang, all about self-preservation of the Chinese Communist Party, lauding its ‘goodness’ and warning of the ‘scary’ world outside mainland China, as can be seen, for example, in the wealth of disinformation disseminated during the Hong Kong protests and vis-à-vis COVID.

A slide show highlighted China’s internet – or ‘intranet’– in which the ‘great firewall’ blocks any foreign site the Communist Party doesn’t think it can control, with sites such as Facebook and Twitter replaced by Chinese alternatives, including the ‘super app’ WeChat, which serves numerous functions in one app and is ‘both a utopia and a dystopia’, as it is very useful but demands complete sacrifice of data, to which the ‘omnipresent’ Chinese government helps itself.

Zhang also addressed how the CCP had domestically turned the COVID pandemic from disaster to victory through its propaganda machine, and the issue of living under censorship in China, as the Chinese government has a long reach within social media. If you post a word on social media, you have already set off some kind of monitor, said Zhang. Andif you are a critic of the Chinese government, ‘you will probably get a knock on the door.’

TDF Chair Barry Gardiner ended with a few words on the areas in which China cooperates with the international community, as well as those in which it is in contention.

Seminar Report: Brothers, not ‘others’

Seminar Report: Brexit And Its Impact On Asia & The Commonwealth