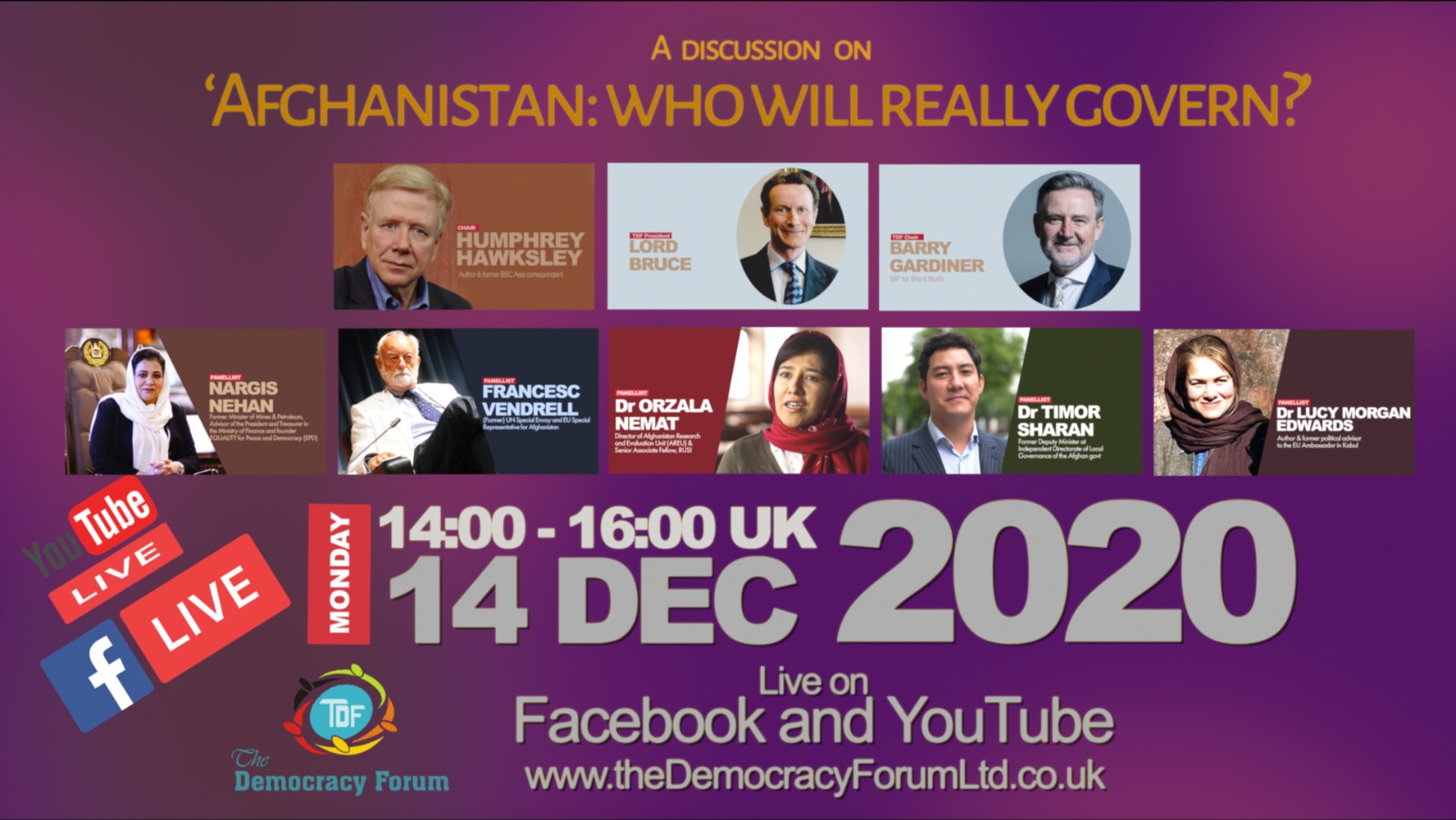 With peace talks between the Afghan government and the Taliban having reached a breakthrough and US and NATO forces preparing to withdraw, after years of conflict and political flux, who will really govern Afghanistan? To discuss this, in its final seminar of 2020 The Democracy Forum invited a panel of speakers who have been at the coalface of Afghanistan’s long years of conflict.

The world is now looking to the Afghan people and their representatives for a practical solution and a peaceful transition, began TDF President Lord Bruce, though history suggests Afghanistan’s future as a well-governed nation state at peace with itself doesn’t bode well, and there are too many parallels to ignore where the withdrawal of occupying forces and subsidies have exposed a vacuum too deep to fill. Hopes that a resumption of talks between the Afghan government, Taliban leadership and representatives of civil society could lead to a sustainable power-sharing agreement faded with the US government’s announcement to advance withdrawal of its remaining forces before the end of the current administration in January, and Taliban attacks have subsequently increased across Afghanistan. But time may also be running out on their ascendancy, said Lord Bruce, as a major rift is opening up between the Taliban leadership and its principal allies, while in the background lies the shadowy hand of sponsorship representing state security forces in Pakistan, Iran and the Arab world.

What Afghanistan needs now is the solid prospect of foreign direct investment, not state-sponsored subsidies to paramilitary organisations. The current situation is unsustainable, with foreign donors covering 75 per cent of the country’s operating budget. Private investment, concluded Lord Bruce, will ultimately matter far more to the country’s future than international donors because after years of war, foreign governments are weary of paying Afghanistan’s bills.

Chair Humphrey Hawksley introduced the first speaker on a panel that ‘knows Afghanistan from every angle’: Naveed Noormal, First Secretary at the Afghan Embassy in London, who spoke of the recent breakthrough in negotiations between the government of Afghanistan and the Taliban in Doha. Noormal saw cause for both optimism and pessimism regarding the peace process. With all Afghans tired of bloodshed and the country’s youthful population, in particular, unwilling to sacrifice gains made in recent years for a return to the dark days of the Taliban regime, there is a consensus over ending the country’s long war through a political settlement. Noormal said Afghans were seeking a dignified and lasting peace, where anyone is able to vote without fear or discrimination. For whoever governs Afghanistan, it is key that the country is driven by the interests of the people and of the region.

However, he warned that many commitments made in the US-Taliban deal have not yet been met, with the Taliban showing no evidence of having broken its ties with al-Qaeda, and no mention of Taliban safe havens in the region. This needs to be addressed thoroughly, as there can be no lasting peace if there is a machine that is producing disposable fighters. Many challenges lie ahead, concluded Noormal, including proxy wars in the region that will directly impact the peace process, so patience is crucial.

Concurring with Noormal’s assessment of peace as a slow process, Francesc Vendrell, a former UN Special Envoy and EU Special Representative for Afghanistan, said the agreement between the US and the Taliban left a lot to be desired as it ignored the Afghan government and Afghan political forces, which will harm the peace process. He considered the core interests of internal parties within Afghanistan – the government, the Afghan people and also the Taliban – yet so far, he saw no indication that the Taliban is seeking a power-sharing agreement with the government. It is also important to take into account third parties like Pakistan, Iran, Russia, India and the US, who believe it is not in their interest for the Taliban to take full power in Kabul, though they do not really have any clear idea what the solution should be. Vendrell said it was unfortunate that there is no UN mediator, and the ceasefires in Afghanistan, since they are not seriously monitored by a neutral third party, are unlikely to last.

In conclusion, Vendrell said he continued to believe that it would be in the interest of the two sides, and of the third parties, if the UN were to deploy a mediator who would be involved in the current dialogue but also take into account the interests of Afghanistan’s regional neighbours.

Afghanistan’s history of donor dependency, argued Dr Orzala Nemat, Director of Afghanistan Research and Evaluation Unit (AREU), means that state building has been geared more towards external forces than to building workable internal systems for the country, such as revenue collection mechanisms. She saw future sources of funding as hugely challenging, especially given the existence of widespread corruption and patronage politics, but cautioned against a new form of ‘debt trap’ dependency through loans, saying Afghanistan should learn from the experiences of African countries vis-à-vis China’s BRI.

Global partnerships on investment and developments projects would greatly help Afghanistan, said Nemat, though funding of security forces is the top priority. Two significant if invisible sources of aid dependency in Afghanistan are money spent through insurgencies, and the influential illicit economy, We must consider all these points, she insisted, when we think about how Afghanistan can build a future that is more independent from its international partners.

In talking about the long Afghan peace process, Dr Lucy Morgan Edwards, a former Political Advisor to the EU Ambassador in Kabul, felt a sense of déjà vu, as the same still problems seem to be impeding progress. There has been much bad faith in reporting on Afghanistan, she said, with the western media particularly guilty of developing a very limited narrative, and 9/11 – the catalyst for US and NATO forces’ presence in Afghanistan – a lynchpin issue that has not been properly assessed or investigated.

For the Afghan people to start self-sustaining, in the face of external powers with their own interests competing for influence, Edwards said certain aspects needed to be examined more honestly: for example, use of the drugs trade to fund black operations, the military-industrial complex and its role in perpetuating the Afghan war, and who is funding al-Qaeda and ISIS. Drawing parallels with the situation in Syria, she believed certain rebels were being funded by the West, so a more honest conversation about how proxies are being used in Afghanistan is paramount. In conclusion, she said there needs to be more engagement on the level of the Afghan people and what they want, not just what surrounding elites from different countries want.

Despite all the challenges facing Afghanistan on its road to self-sufficiency and democracy, Nargis Nehan, Former Minister of Mines and Petroleum, and founder of  EQUALITY for Peace and Democracy, expressed cautious optimism about the peace process as, for all its shortcomings, it is still a step forward. But even if we sign the peace agreement with the Taliban, she said, domestic problems remain, and for sustainable development, prosperity and democracy, four key elements are needed: strong leadership to encourage the Afghan people to work together and become a nation; the rule of law and the political will to enforce it; human resources in, for example, the education and training of women and young people which will empower them to be the face of change in Afghanistan; and proper management and formalisation of resources within a legal framework.

While Afghanistan is a landlocked country, it is also a bridge that connects different parts of Asia, though Nargis said a crucial question is whether Afghanistan can bring enough security so these countries can trust us. She also highlighted the need to fight corruption, how the balance of power between the country’s centre and provinces is too skewed in favour of Kabul, and added that the whole institution of government needs to be transformed to bring greater inclusivity, a shared vision for the country, and consistency.

The problems of Kabul-centric governance were also raised by Dr Timor Sharan, a Former Deputy Minister at the Independent Directorate of Local Governance in the Afghan Government. With tens of thousands of villages, numerous districts, provinces and municipalities, political representation was highly complex, and the task of bringing all these different elements together was daunting. Sharan spoke of the structure the state inherited at the 2001 Bonn Conference, giving Afghanistan a very centralised political system and Kabul-centric model that excludes the majority of the population from vital decision-making processes.

Sharan also reflected on how, both at the national and sub-national level, the state structure and industries such as oil, gas and mining have been captured by powerful political networks. This flow of resources has produced new political elites, with at least half the Afghan parliament involved in some sort of illicit economy. There is a lot of resistance to this at the community level, as well as resistance to the Taliban, with people preferring some form of self-governance and a more bottom-up approach to developing a future political system.

Summing up, TDF chair Barry Gardiner MP said this focus on bottom-up, not top-down, was one of the key takeaway points from the discussion. However, he concluded that, despite much erudite analysis, more political vision was needed about who will really govern Afghanistan, and how.