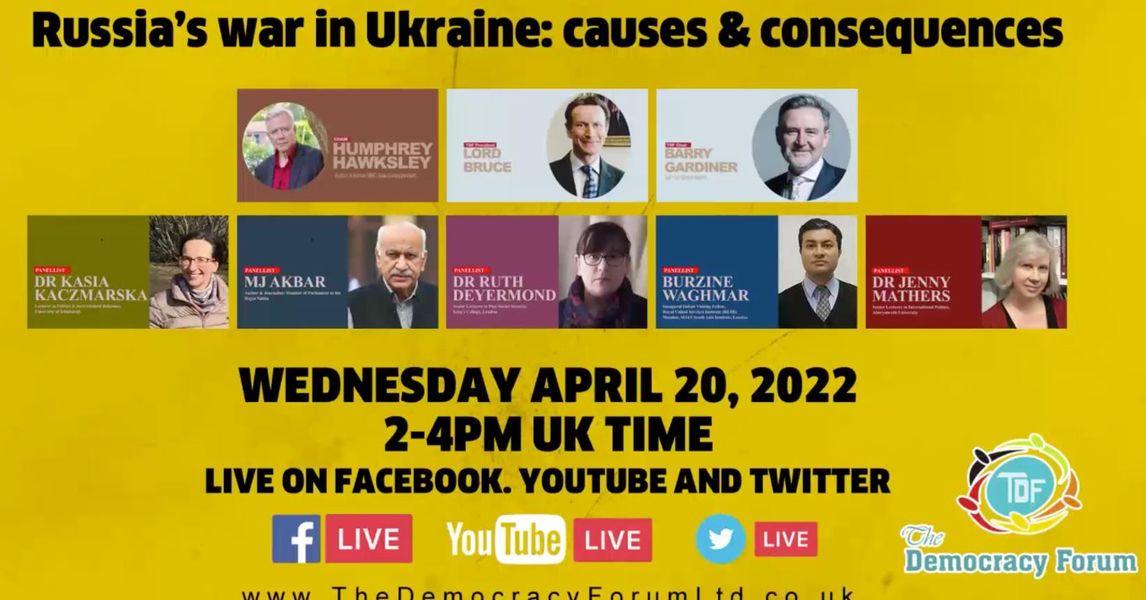 The Democracy Forum’s latest seminar addressed the reasons behind Russia’s invasion of Ukraine, and the potential regional and global repercussions

Almost two months into the conflict in Ukraine, which has left thousands dead, millions displaced and cities in ruins, London-based not-for-profit The Democracy Forum hosted a virtual seminar titled ‘Russia’s war in Ukraine: causes and consequences’.

In his introduction to the event, TDF President Lord Bruce spoke of how the real tragedy for Ukraine is, unwittingly, to offer a harbinger of far worse crimes against humanity yet to come, a contested space from which further conflict doubtlessly will occur, the rapid deterioration of international trade – with dire shortages of energy and food supply – and perhaps the emergence of a new world order.

Offering the perspective of a neutral observer, journalist and writer MJ Akbar said the war could be ‘a turning point in modern history’. In reference to Ukrainian president Zelenskyy’s question in February as to why the West had abandoned his country, Akbar said Ukraine had in fact been abandoned at the end of 2021 when President Biden said that if Russia began military operations in Ukraine, NATO would not intervene. The sanctions imposed by the West had only had a limited impact, Akbar believed, adding that Iran has withstood years of sanctions and still does not show any great drop in energy capacities and that the sanctions are ineffective as the price of Russian gas and oil has increased substantially since the conflict began. Akbar noted that the continuation of energy imports from Russia has been described as blood money by Zelenskyy, and that some European leaders are using Ukraine for their own political purposes, such as to deflect from domestic problems at home. Putin has been emboldened by the perceived weakness of Western leaders, said Akbar, highlighting that Obama in 2012 drew a red line on Syria, which he later backed down on. If the US does not assert itself regarding Taiwan when the time comes, warned Akbar, the world will probably be witnessing the decline of American power. He also noted that Putin has failed to distinguish between reach and overreach and this mistake will cost Russia heavily in the short, medium and in the long term. What we are witnessing in Ukraine is the re-emergence of the nation state, he added, and the turning point came in 1990 with the collapse of the Soviet Union, when America began to misread its future role, believing that there were no more wars to conquer and that its role was to act as philosopher, policeman and arbiter of security to the rest of the world. He alluded to Japan’s desire to have ‘its own finger on the nuclear button’ through nuclear sharing, while pointing out that Germany has simultaneously doubled its military budget. So the two powers which were defeated in 1945 have sent a very important message that the world needs to take a long hard look at itself and its institutions, since the UN Security Council has been impotent to act and is an embarrassment rather than a solution to world problems.

Focusing on the war’s impact on the UK and Europe, Dr Kasia Kaczmarska of Edinburgh University said that, since its beginning, we have been witnessing at least three processes that are unprecedented in terms of the extraordinary speed at which they have occurred. The first, and well documented by the media, has been the tragic mass exodus of Ukrainian refugees, which has now reached close to 5 million individuals displaced beyond Ukraine’s borders. Second, we have observed a rapid growth of authoritarian practices in Russia, including the exacerbated control of information flows and the astounding impunity of the repressive apparatus on the margins of those monumental events, and thirdly, and perhaps less visible, is a rapid extraction of Russia from the system of global knowledge production and the internationalised higher education. Kaczmarska highlighted this last in particular, with specific reference to Russia’s academic community and its reactions to the war’s infringements on academic freedom, orchestrated by the Russian state, and the consequences for Russian higher education and global knowledge sharing, in particular with Western countries and with the United Kingdom.

Ruth Deyermond, a senior lecturer in post-Soviet security at King’s College, London, said that, in order to attempt to make sense of what seems to be an otherwise incomprehensible decision by the Russian government to start a war against a neighbour that posed no threat to Russian security, so as to prevent NATO accession that was not going to happen, we need to begin by understanding the world views of President Putin and those around him in government, and the academic elite that think about international relations. What do they think about Russia’s place in the world? asked Deyermond. The key thing to note is that this worldview is fundamentally realist in the international relations theory sense, which means several very important things. The first is that power is everything: in states, outside states and in relations between states. There is a zero sum world view at work in which an adversary’s gain is necessarily Russia’s loss, and Russia’s gain is necessarily an adversary’s loss – a world view in which might makes right. Deyermond then highlighted a second important point in this realist world view, and one that she believed the West has failed to think about as much as it usefully should: that norms and values, and the discussion of norms and values by states are really seen very crudely as an instrument of power and power projection. This means that the post-Cold War, US-led Western language about democracy and human rights is simply seen as a tool by which the US can advance its national interests under the cover of liberalism. Other states in this view are simply cyphers of great powers, lacking their own agency; perhaps for this reason and also for reasons connected with Russia’s history, Russia’s great power status in the Putin period, and particularly in the last decade, has become absolutely central to the way that the Russian government conceives of Russian national identity, which is intimately linked with the idea that Russia is a great power, which in turn is an existential matter for the Russian government.

There has been a tragic mass exodus of Ukrainian refugees, which has now reached close to 5 million individuals

Examining contrasting national security responses to the war in Ukraine from China, Iran and India, and the complex historical and economic reasons which lie behind such positions, was Burzine Waghmar, Inaugural Indian Visiting Fellow at the Royal United Services Institute. He spoke of support for Russia among India’s intelligentsia both right and left and also within the populace, with frequent complaints circulating on social media about how the USA came to age during the third Indo-Pakistan war of 1971, ignoring the fact how Kennedy saved Nehru’s and India in 1962. Meanwhile, while former officials at the Indian foreign office privately reminisce what a hard bargain Russia has been on trade and military deals, India is reluctance to denounce the invasion and displease China’s wrong side. The speaker noted that Sino-Indo flare-ups and fatalities have been ongoing since 2017 and that Putin has been very vocal in his displeasure of India joining the group. Indeed, even Mikhail Gorbachev as last visiting soviet premier made it plain to India in November 1986 that the USSR cannot be counted upon. Notably, the Soviets, like the Indians in 1962, had a brief border war with Mao in 1969 and Gorbachev oversaw the first joint demarcation settlement in 1999. Moreover, in terms of economics, India is the third largest military spender after the USA and China and second largest importer of weapons from Saudi Arabia. Since 2007, the USA has secured deals worth more than 21 billion dollars from India and India has spent over 800 billion in arms deals during the last 15 years from Russia. While the trio congratulate themselves on the strength of these ties, the relationships are in reality based on deception and lies and hallmarked by national interests.

Dr Jenny Mathers, a senior lecturer in international politics at Aberystwyth University, focused on security issues and some of the gendered causes and consequences of security and insecurity in Russia’s war in Ukraine. She explained what is meant by these terms in the context of feminist understanding of security and drew attention to the way that we value characteristics and skills associated with men and masculinity above those associated with women and femininity. She argued that gender is as much about power relations as about what individual people do, and pointed out that Putin’s ideal for a secure Russian state is one where society plays its part by both supporting the state and by also conforming to traditional conservative ideas about gender and family. Mathers also spoke of Putin’s strong awareness of the power of ideas and the fear he has of ideas that are alien to the way that Russia sees itself.